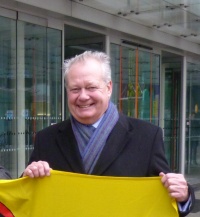 Eric Ollerenshaw is the former UK Conservative Party member of parliament (MP) for Lancaster and Fleetwood (2010-2015).

Ollerenshaw lost his seat in the 2015 general election to the Labour Party's candidate Catherine Smith by 1,265 votes.[1]

Pushing for a bigger share of community profits from fracking

In 2013 Ollerenshaw convened a cross-party meeting with other Lancashire MPs to join forces and demand more money for their constituents from the UK Government in return for “fracking rights” after concluding that the sweeteners being offered were not good enough. Describing it as 'practical politics' Eric Ollerenshaw explained that they wanted a bigger share of the profits than the £100,000 of community benefits per well drilled promised, and the proposed 1 per cent share of revenues generated when production starts.'

“We don’t want the crumbs off the table. We want to make sure we get something out of this for the long-term for Lancashire as a whole”, said Ollerenshaw.

In January 2014 the MPs wrote to PM David Cameron suggesting that a 10 per cent share of profits from shale gas sites would be reasonable - substantially more than the 1 per cent initially offered. [2]

Cuadrilla Energy Resources has licences to test-drill for shale gas in Lancashire, at sites in Weeton (Preese Hall), Anna's Road also known as Westby, Grange Hill, Singleton and Banks, near Southport. The firm also owns sites in Wharles, Kirkham and Elswick, which was fracked by previous owners.