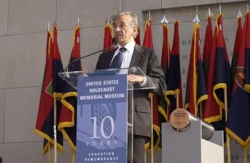 Elie Wiesel was born in 1928 in the town of Sighet (now part of Romania) and lives in New York City as a United States citizen. He has been a visiting scholar at Yale University, a Distinguished Professor of Judaic Studies at the City College of New York, and since 1976 has been Andrew W. Mellon Professor in the Humanities at Boston University where he teaches "Literature of Memory." [1]

... and what a lovely setting for it too: against the backdrop of the rosy cliffs of Petra. Here were gathered a handful of Nobel Prize laureates who had performed not a single service for humanity. None of these had invented insulin or even aspirin, or produced great literature or made peace anywhere in the world – in fact, one of them had caused wars. It was a collection of self-obsessed narcissists, caring only about how to refine and polish their image. Prime among them was a mediocre novelist, a self-promoting racist by the name of Elie Weisel, who, regretfully, took the appalling tragedy of the death of millions of Jews in the Holocaust and reduced it to a kiosk for selling anti-Arab hatred. [2]

[Wiesel] is notoriously cold hearted when it comes to Muslims. Most recently he took out an ad in the Washington Post telling Obama that Jerusalem belongs to Jews, and only Jews. In his life, he has never criticized the Israeli government on humanitarian grounds for anything and proudly says he never will. His index finger only points outward...He is only a humanitarian on issues that do not involve his own group. He should confine himself to issues where his own views are not governed by bigotry.[3]