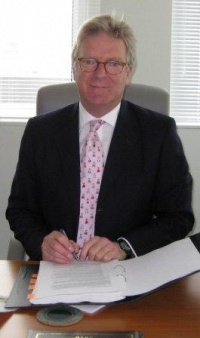 Sir Edward Garnier QC is the former Conservative Party MP for Harborough. He is a Queens Counsel in private practice.

Garnier has come under scrutiny for being one of the highest earning MPs who have jobs outside of parliament. In 2014 he earned £275,584 working as a QC in addition to his salary as an MP. He has defended this, saying his experience as a barrister has made him a better MP, and that his constituents were able to vote him out if they objected to it. [4]

Garnier told the Guardian he felt it is 'essential that the Commons, and thus the frontbench teams in both government and opposition, are not just reserved for professional politicians without experience of the world outside Westminster … Parliament is the better for having MPs who do not spend and have not spent their whole time inside politics'. [5]

Name of donor: Conservative Middle East Council
Address of donor: 55 Tufton Street, London SW1P 3QL
Amount of donation (or estimate of the probable value): flights, hotel accommodation, transportation and food with a value of £1,540.
Destination of visit: Israel and the West Bank
Date of visit: 27-31 May 2013
Purpose of visit: To participate in a parliamentary fact finding delegation. (Registered 6 June 2013]

Amount of donation or nature and value if donation in kind: Two tickets for the RHS Chelsea Flower show at an approximate value of £1,200

Name of donor: JTI
Address of donor: Members Hill, Brooklands Rd, Weybridge, KT13 0QU
Amount of donation or nature and value if donation in kind: Tickets for my wife and me, to

Clients include DLA Piper from January 2014 - Garnier sought advice from ACOBA to accept a retainer with DLA Piper in September 2013.

The Committee advised Sir Edward that is saw no reason why he should not take the post, subject to the conditions that:

- that he should not draw on any privileged information available to him as a Minister; and - for two years his your last day in ministerial office, you should not become personally involved in lobbying the UK Government on behalf of his new employer, its parent company or its clients.