Desmond 'Barry' Loader is the cover name used by a former Special Demonstration Squad (SDS) undercover officer who was deployed into the Communist Party of England (Marxist-Leninist) from 1975 to 1978.[1] For the purposes of the Undercover Policing Inquiry and Operation Herne he is also referred to by the cipher HN13. (for the N cipher system see under N officers).

Inquiry Chair, Sir John Mitting, has ruled that the officer's real name will be restricted in the Inquiry. [2]
Loader was twice prosecuted for public order offences in his cover name and convicted once. Using a false name in court is one of the issues that brought about the public inquiry.[3] Despite this, the Inquiry Chair, John Mitting, stated that there is no known allegation of misconduct during the deployment. The officer is deceased.[4]

We are grateful to Michael Chant, current General Secretary of the RCPB (M-L)[5] for his help with this profile[6]

The Communist Party of England (Marxist-Leninist)

The CPE-ML had its origins in the Sussex University-based English Student Movement, part of the Hardial Bains-inspired tendency known as the Internationalists; and it formed following their Necessity For Change conference in 1967.[7] The RCPB (M-L) had a modest membership – and never aimed to be a mass membership organisation. It also had a number of ‘front’ organisations including the ‘South London People's Front, the East London People’s Front and the Progressive Cultural Association.[8]

In 1972, an important facet of the party was 'the struggle of the Irish people for freedom and independence, and activists were distributing and collecting signatures for a petition as part of this work'.[10]

Around this time, the CPE (M-L) had members across the UK they were centered around South and East London, although they also had a significant presence in Birmingham.[8]

The successor party to the CPE, the Revolutionary Communist Party of Britain (Marxist-Leninist) were later infiltrated by another SDS officer Malcolm Shearing (alias) between 1981 and 1985.

Confrontations with the Police

In the 1970s, members of the CPE had several encounters with uniformed police. While none of these incidents are directly connected to the undercover policing deployments, they would have likely raised the group's profile as far as the police - and specifically Special Branch - were concerned.

Party comrades who were leafleting were 'brutally attacked' whilst by the police at a demonstration in East Street market in South East London in 1972.[11] Several received prison sentences.[11] Prominent experimental musician and party member Cornelius Cardew's song/piano piece 'Four Principles on Ireland' was inspired by this local confrontation.[11]

Last December [in 1972] some supporters of the Communist Party of England (Marxist‐Leninist) were attacked by the London police and planted with drugs, ammunition, explosives and have been committed to trial at the Old Bailey on concocted charges. Comrade [redacted name], an active supporter of the Communist Party of England (Marxist‐Leninist), is at present serving a five-year sentence on concocted charges of 'malicious wounding' and 'assault'.

A report from the time gives some more details on the attending court case and sentencing:[14] 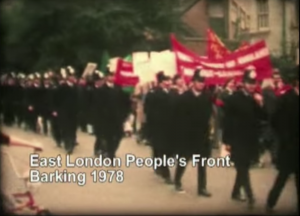 Screenshot from a film about CPE member Cornelius Cardew - 'The Content of Our Song'. Later clips of the film show rough arrests of party supporters on this demonstration in East London, 1978

This was a result of a police raid on a 'house used by comrades and fabricated evidence'.[8]

Also in 1973/74, several party members were arrested for the (and according to the CPE, again, fabricated) charge of the theft of roof lead, after their car was stopped on Queens Town Road, Battersea.[8][10]

No Platform and Anti-Fascism

In the 1970s across higher education campuses, students launched a number of protests at right-wing and fascist speakers. These incidents in the early 1970s were a 'prelude' to what became known as 'No Platforming' such speakers.[15]

One incident allegedly involved student members of the CPE from Birmingham and elsewhere:[15] :

On 8 May 1973, the psychologist Hans Eysenck, whose theories were rooted in the controversial theory of eugenics, attempted to deliver a lecture at the London School of Economics, but faced heavy protests from students. A group of Maoists stormed the stage and assaulted Eysenck.

The CPE (M-L) was also vocal and active in broader anti-fascist politics during the 1970s and early 1980s at a time when National Front was a significant force on the street and sometimes at the ballot box. During this time the NF was successfully challenged on the street by a variety of anti-fascist groups.

In 1974, they were also present at the Red Lion Square counter-fascist demo during clashes between anti-fascists and the police took place. During this violent confrontation, one protester Kevin Gately received severe head injuries from which he died.[16][17] Members of the party also gave evidence at the subsequent public inquiry into the incident - which was chaired by Lord Scarman.[10][18]

Commensurate with significant anti-fascist activity, there was a probable fascist attack on the election headquarters of the South London People’s Front (SLPF) in the 1978 Lambeth Central by-election.[10]

As mentioned, Loader was twice prosecuted for public order offences in his cover name and convicted once.[2] This could mean that anyone else arrested and convicted alongside him has an unsafe conviction.

Court cases where undercover officers used their cover names in British courts of law might mean that genuine activist's convictions are unsafe. Further, undercover officers acting as 'agent provocateurs', or being privy to legally privileged information may also make convictions unsafe. In fact, this is one of the many issues being investigated by the Undercover Policing Inquiry and has been (and still are) subject to review by the court of appeal and other bodies.

This issue was initially brought to light by the Ratcliffe Power station case (where 10 convictions were overturned and another related prosecution discontinued)[19][20][21] and the Ellison Review[22] which found:[23]

[...] that the SDS operated as if exempt from the proper rules of disclosure in criminal cases, and that there is real potential for miscarriages of justices to have occurred. In particular, Ellison says that there is an inevitable potential for SDS officers to have been viewed by those they infiltrated as encouraging and participating in criminal behaviour. He [Ellison] refers to officers in criminal trials failing to reveal their true identities, meaning that crucial information that should have been disclosed was not given to the defence and the court; and he finds that undercover officers sometimes failed to correct evidence given in court which they knew was wrong.

A review undertaken by the Criminal Case Review Commission[24] in 2017/18 found 19 cases which involved 84 convicted individuals, they were only able to trace a single defendant who did not wish to pursue an appeal.[25][26]

One further conviction was overturned in 2014, that of John Jordan. In August 1996, undercover police officer Jim Boyling, Jordan and other campaigners were arrested and charged with a public order offence after occupying a government office. The Crown Prosecution Service refused to give the reason why the conviction was quashed.[27]

Two cases both involving animal rights activist Geoff Sheppard are ongoing. One where spycop Bob Lambert is accused of setting fire to a Debenhams store, an action for which Sheppard was jailed[28][29] and the other where undercover Matt Rayner encouraged Sheppard to buy a shotgun, for which Sheppard was also sent to prison.[30]

Desmond ‘Barry’ Loader is recalled by party members, although with very little detail. He was known as ‘Barry’ rather than 'Desmond'. One firmly held recollection from those around at the time - and at odds with the Inquiry’s deployment dates - is that he did not appear until 1978. This was at election hustings in for the constituency of central Lambeth where Stuart Monro stood for the party under ‘South London People’s Front’.[8]

In the Lambeth Central by-election of 1978, Stuart Monro stood as a candidate representing the South London People’s Front, supported by CPE(ML). A campaign centre was set up in a private house in Stockwell, where mailing out of election leaflets, organising of canvassers, and other activities took place. It was only at this time that Barry Loader [...] appeared and offered to help. Given he had no known links to any progressive activity and his general bearing, he was immediately suspected of being an undercover policeman. However, following Lenin’s dictum to put suspected spies to useful, but not compromising work, he was assigned to washing-up duties in the kitchen, large-scale cooking being required to feed the election volunteers. Loader carried out his duties diligently, but was not invited to any discussions or to participate in any planning activities. When the election period ended, he disappeared, and a visit to the address he had given revealed only an empty bed-sit.

Publication of the real name of HN13 will not assist the Inquiry to get the truth of his deployment or about undercover deployments generally. I have explained the harm which would be caused by publication to his widow and children in the 'minded to' note of 15 January 2018. I do not resile from the conclusions there expressed.