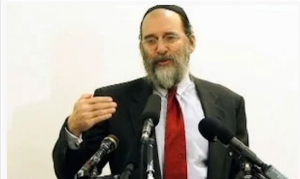 David Yerushalmi is an American lawyer and anti-Shariah law activist[1] 'with a history of controversial statements about race, immigration and Islam'. He is a Hasidic Jew who is a veteran of the right-wing Israeli settlers movement and is best known for authoring the model anti-Sharia legislation dubbed 'American Laws for American Courts' and introduced in more than 30 states across the USA in 2010. Of that law, who is legally meaningless, he said the aim was more to teach Americans about the dangers of Shariah rather than to change anything in the legal system. [2]

In 2006, he founded the Society of Americans for National Existence, which proposed a law making 'adherence to Islam' a crime punishable by 20 years in prison; ordering the declaration of war on 'the Muslim Nation'; declaring non-citizen Muslims in America to be 'alien enemies'; barring Muslim immigration; and setting up 'special criminal camps' to house undocumented immigrants.

According to the New York Times 'Yerushalmi has come to exercise a striking influence over American public discourse about Shariah', ', despite his lack of formal training in Islamic law'.[3]

On Islam and Muslims

In 2006, he wrote that there were 'conservatives' who 'recognize Islam is not a "religion" in the Western tradition but rather a license to murder by the wretched of the world.' He added:

'Reality tells us that Islam is a World State ideology that seeks the destruction of the West and our national existence.' [4]

In other articles and interviews from the same year, he claimed again:

'Our greatest enemy today is Islam. The only Islam appearing in any formal way around the world is one that seeks a world Caliphate through murder, terror and fear.' [5]
'The more carefully reviewed evidence, however, suggests that because jihadism is in fact traditional Islam modernized to war against the ideological threat posed by the West against Islam proper, there is no way to keep faithful Muslims out of the war. If this is true, any Muslim who sticks his neck out of the mosque to yell some obscenity at the West should be considered an enemy combatant and killed or captured and held for the duration of the war.' [6]
'Islam was born in violence; it will die that way. [...]Any wish to the contrary is sheer Pollyannaism [blind optimism].'[6]
'Islamic civilization has turned away from what few moments of civilized behavior it has manifested for now hundreds of years.' [7]

'The Muslim peoples, those committed to Islam as we know it today, are our enemies.' [7]

On Black communities and women

It was reported in 2001 by the Jewish Daily Forward that he had claimed political correctness forbids asking 'hard questions' about why 'blacks in NYC are 2.5 times more overrepresented as murderers than any other race'. [8]

He also wrote an essay in 2006 called On Race: A Tentative Discussion, in which he described black people (in New York, 'at least') as 'the most murderous of peoples,' claimed that '[m]ost of the fundamental differences between the races are genetic' and asserted that '[t]here is a reason the founding fathers did not give women or black slaves the right to vote.' [2]

Yerushalmi is a fierce critic of democracy, both in the United States and Israel: he denounced Israel as a democratic state and called for it to 'cast off the yoke of liberal democracy' in 1997, adding that 'If your answer is democracy in a liberal or western sense, know you have sided with the Palestinians of Hamas'. The Jewish Week reported later in the same year that he indeed 'condemns democracy in the United States'. [9]