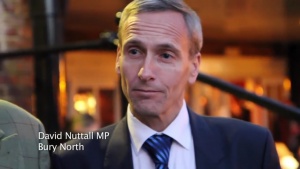 David Nuttall has been the Conservative Party MP for Bury North since 2010.[1] Nuttall retained his seat with a majority of 378 in the 2015 general election. [2]

Nutall was vice-chair of the All Party Parliamentary Group on Unconventional Oil and Gas from 2015-2017.

Nuttall's constituency includes two oil and gas licence blocks, both awarded to companies by the Oil and Gas Authority under the 14th licensing round in 2015 to Hutton Energy. There are plans for two wells and 2D and 3D seismic surveying, but no active applications are currently underway. [3] In July 2016, Bury Council voted to ban fracking on the share of the land in the borough belonging to the council, citing growing public concern over environmental and health risks. [4]

'I support the concept of making use of the natural resources we have for our benefit. Just as we have done over the centuries with wood, coal, oil and gas. Now there is the possibility that enormous amounts of shale gas could be extracted and used by Britons [...] I doubt any Government would not want to proceed with fracking which is why I take the view that if it is going to go ahead and it could affect communities here in Bury in the long term it is essential that those most affected receive some of the financial benefit.' [5]

During the same time, Nuttall was amongst a group of cross-party MPs and council leaders to demand the government ensure communities where fracking may take place receive a 10% share of profits. [6]

In May 2016, Nuttal said in parliament that the government should do more to both ease concerns fracking could take place in protected areas, and to promote the potential job opportunities offered by the shale gas industry. [7]

Nuttall has generally voted against increased regulation on fracking. [8]