Conall McDevitt is a former Irish nationalist politician and member of the Northern Ireland Assembly for South Belfast. He resigned in September 2013 following disclosure that he had seriously breached the members’ code by failing to declare £6,750 earned in 2010 from his former employer PR and lobbying company Weber Shandwick.

McDevitt was managing director of Weber Shandwick's Belfast office from 2007 until December 2009, when he quit to move into politics. He had previously worked as director of comms for the Social Democratic and Labour Party (SDLP) from 1996 to 1999. He was elected to succeed the SDLP's Carmel Hanna in 2010. 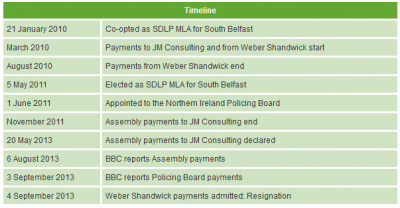 McDevitt resigned from the Northern Ireland Assembly after the revelation of three separate payments, amounting to £50,750:

In a public statement on 4 September 2013 McDevitt said:

I have submitted by resignation as an MLA with immediate effect. Over the past few weeks there has been considerable public interest in my use of public money. I am satisfied that at all times I complied with the obligations on me and am compliant with my duties.

Between March 2010 and August 2010 I received a total of £6,750 from my former employers, Weber Shandwick. These payments related to internal work within Weber Shandwick. I resigned as Managing Director of the Belfast office in December 2009 and I provided support and mentoring to the new management team following my departure from the company.

I was never asked to nor did I ever represent any of the company’s clients whilst an MLA. These payments were made through JM Consulting, a consultancy which my wife has an interest in. These are registerable interests under the Assembly rules. I have now registered these earnings on my register.

My failure to register these interests at the time means that I have fallen below the standards of expected of me in public office.

I have done my best to discharge my duties as an MLA with integrity but there is no question that I failed to do so on this occasion. I apologise unreservedly for my failures in this regard. It has been the greatest honour of my professional life to serve the people of South Belfast and the SDLP since January 2010.

I will forever treasure the opportunity given to me to make a contribution to the building of a new society here. That work will be continued by my successor whomever he or she may be. I would like to ask for some privacy at this time for myself and my family. [4]