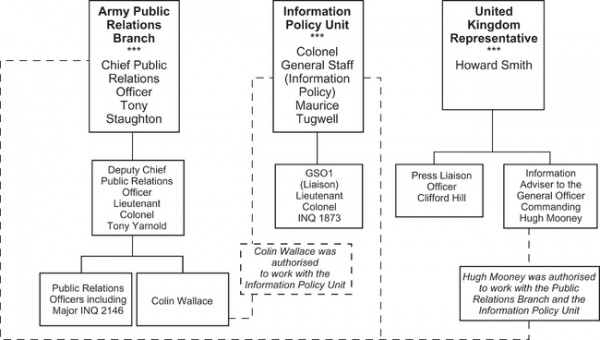 Clifford Hill was an Information Research Department operative seconded to the Northern Ireland Office in the early 1970s. Known as 'Cliff the spy' inside Stormont - according to NIO sources[1] he played a key role in coordinating official disinformation campaigns.

According to Tony Staughton, an information officer at British Army HQ in Northern Ireland:

Immediately after internment, the IRA started to get the upper hand. And from that time on, the Foreign Office and the Intelligence people insisted on much more say in public relations. They sent a man over called Hugh Mooney - he was from a department of the Foreign Office called the Information Research Department (IRD). None of us ever knew what Mooney was about. Who he reported to or what he was entitled to. All we knew was that they gave him a big house to live in and freedom to move at will throughout the barracks and Stormont. There was another man called Clifford Hill - I always imagined that he had something to do with Intelligence. None of us knew precisely what he was up to either.[2]

It seems clear from Sir Donald Maitland's statement to the Bloody Sunday Inquiry that Clifford Hill worked for the Information Research Department. (For a good overview of British public relations/information policy/psychological operations in Northern Ireland at this time, see this submission to the inquiry.) Among the documents which Maitland was questioned about are the two I have come across. In the light of Dean Godson's recent advocacy of the IRD I think they are worth reproducing here.

The first of these is a note by Maitland recording a meeting with Clifford Hill, together with a brief for Hill's role as Press Liaison Officer, Northern Ireland. In his evidence to the Bloody Sunday Inquiry, Maitland could not recall this meeting or the brief, which he believes Hill wrote himself. Maitland's note contains this interesting comment:

Sir Dick White, Norman Reddaway and I have decided on the machinery for placing anti IRA propaganda in the British Press and media. This machinery is already in operation. Its first major task will be to produce articles which will counteract the effect of the Compton Report.

The nature of the Compton Report was described last year in this very apposite report by Paul Reynolds:

It ruled, controversially, that these did not constitute torture or brutality but did amount to "physical ill-treatment." (BBC News)

to blacken the reputation of the IRA by highlighting their brutality towards individuals... the cowardly character of their tactics and their callous disregard for the lives of innocent bystanders. The IRA's connections with other urban guerrilla organisations should be emphasised in order to show that the hard core Provisionals have ambitions quite unconnected with the status of the Catholic minority in Northern Ireland and indeed with partition.

I take this absurd statement to be a sign of the IRD's anti-communist obsession. If so, its particularly noteworthy given that the British information organisations in Northern Ireland would later be the source of the Clockwork Orange operation Source, which attempted to link first the IRA and then Westminster politicians to international communism.

The second document I came across is Outlines of a Plan for a Two Year Programme of Counter-Propaganda, by Clifford Hill. This is another document that was put to Sir Donald Maitland at the Bloody Sunday Inquiry, and which he did not recall seeing.

References to 'covert propaganda' notwithstanding, much of this document is unsurprising, though nevertheless interesting. One particular line might be of interest to Dean Godson:

Overseas interest can be expected to die away but propaganda for overseas should move towards encouraging "casebook" study of the situation.[3]

Hill described the following as the first objective of the propaganda campaign:

to disrupt and divide the various parts of the IRA and its associated bodies each from the other. Further, to divide the IRA and, in particular, the provisional IRA from its passive supporters among the catholic community in Northern Ireland.

Amongst the proposed "constant themes" of the campaign were:

the precedent of Northern Ireland for other areas and other "urban guerrilla situations." [5]

During the first phase of the programme the following theme was suggested for special emphasis:

The vicious haphazard inefficiency of the IRA should be constantly stressed. The IRA's disregard for human suffering is the primary theme."

In the second phase the emphasis should shift to:

The stupidity and cowardice of the IRA, their losses and their vulnerability should be stressed... The divisions among supporters or sympathisers of the IRA should be played up... IRA activities in all fields should be presented as on a downward slope." [6]

In the final (post-victory) phase:

"It will be necessary to draw back a little in the propaganda campaign but not to end it... There is need for a longer-term propaganda and public relations campaign to break down or transform public attitudes and "tribal activities." [7]