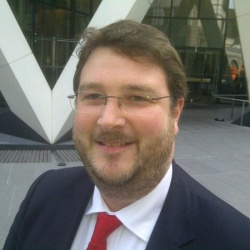 Campbell Storey is associate partner at lobbying and PR firm Westbourne Communications. According to his website biog:

Campbell worked at the heart of the Conservative policy process on two of the most radical sets of policies currently being implemented by the Coalition: welfare and police reform.

At Westbourne, he focuses on developing commercially relevant communications plans and political strategy, while maintaining close links with the public policy community. Campbell was Chief of Staff to the then Shadow Home Secretary before joining Westbourne.

Prior to his work with the Home Office team, he was senior policy adviser for the shadow Work and Pensions and Transport teams. Before politics he worked in IT and ran his own business. [1]

Storey ran as a Westminster parliamentary candidate for Wansbeck at the 2010 General election. [2]

In 2012, he founded a communications and leadership coaching agency called Storey Communications, through which he conducts group workshop sessions on lobbying and organisational techniques. [3]