Publisher, the Asian Voice, member of the Hindu Forum of Britain (HFB) which engages in public policy and community consultation for the government. Some of the consultation exercises conducted by HFB include responses to the Home Office policy on race equality and diversity, the Commission for Equality and Human Rights, QCA and Religious Education Curriculum, Home Affairs Select Committee on Terrorism and Community Relations, Ministers of Religion from Abroad and others. Patel sits on their Patrons Council comprising of prominent British Hindus. The Asian Voice organises conferences, such as that held in 2004 at the House of Commons, which focussed on the issues of Media Representation of Asians, and the launch of Parallel Lives? Poverty among ethnic minority groups in Britain — at a a sumptuous reception at the House of Lords. 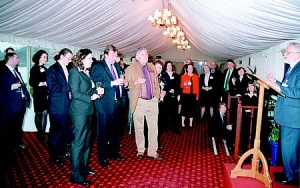 The House of Lords poverty reception

Steve Pound MP can often be found writing in the Asian Voice (AV). His constituency has a Gujarati population and the local ethnic newspaper is the AV. Pound has a further connection to the Labour Friends of India group and as he has said in AV "Ever at the centre of the crowd was, of course, C.B.Patel". Another supporter of Labour Friends of India is Peter Mandelson who showed "unwavering support" at the 2003 Clement Attlee Lecture & Banquet, organised by the Labour Friends of India. Reports note that the guests included recently knighted Sir Gulam Noon, The Hinduja Brothers, Keith Vaz and Lord Swarj Paul.

LFOI is funded by donations from various British Indian companies and individuals and pays MPs expenses to politicians in various business promotions. The Hindu Forum of Britain also collaborates with the Conservative Parliamentary Friends of India and the Lib-Dem Friends of India in an attempt to get suitable candidates into politics. According to Pound Tony McNulty and Barry Gardiner were the founders of the LFOI. When Tony Blair spoke at Annual LFOI Lunch in March 2005:

"Although the Prime Minister managed to chat with table companions Sonjoy Chatterjee (of ICICI Bank) and his wife Amita, Sir Gulam K Noon, Andrew Cahn of British Airways and Mr. Dadiseth of Unilever he also managed to eat most of a superb meal. Then my worst fears were realised."

Tony had to leave to raise funds elsewhere. A (now former director of LFOI) Vikas Pota, runs a London-based consultancy Saffron Chase, that represents such clients as Labour Friends of India as well as the Gujarat and Bengal state governments.