Bridge International Academies is a for-profit company that claims to be the world’s largest chain of primary and pre-primary schools delivering low-cost private schooling. It operates across Kenya, Nigeria and Uganda with plans to expand into other countries, such as India.

The company has been criticised for promoting the privatisation of schooling, which increases inequality, provides no learning gains, and de-professionalises teachers.

It has some influential backers including the British and US governments, Bill Gates, Mark Zuckerberg, and venture capitalists like New Enterprise Associates. 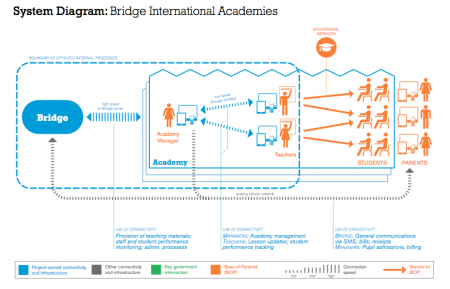 'Bridge International Academies case study from The Broadband Effect: Enhancing Market-based Solutions for the Base of the Pyramid for Inter-American Development Bank, 2014

The key to BIA’s rapid growth is the standardisation of its operating model; the company has developed an 'academy-in-a-box' model, which is reliant on the use of technology in both the running of the school and teaching.

A single manager runs the school with all back office processes automated via a smartphone application; teaching is delivered via a scripted curriculum with everything from the delivery of lessons, to testing and pupil attendance tracked by headquarters via the use of teacher tablets.Teachers are provided with five weeks training before entering classrooms.

Consequently, as many have noted: 'Bridge Academies work with teachers who are not subject to the same standards of training as government school teachers.'[1]

Teachers are provided with tablets, which they are required to connect to the Academy manager’s phone twice per day via a local wireless hotspot in order to update curricula and scripts as well as student records. Teachers record students’ assessment scores, attendance, and lesson pacing on their tablets.

At the central level, all operations are closely monitored through customised software systems.

Bridge International Academies's marketing strategy is mainly 'below-the-line', with each school responsible for their own marketing. Marketing is developed centrally at Bridge headquarters. Academy Managers and teachers then receive training on how to use these tools at the Bridge International Training Institute.

According to a 2014 report for the Inter-American Development Bank, marketing by Bridge Academies comprises of the following:

According to a report for Inter-American Development Bank: 'each new school construction costs approximately US$60,000 (for 22 classrooms, sanitation and kitchen facilities, and technology equipment).

Schools are designed to cover their operational costs after one year, and to pay back the initial investment after four years.

A report for the Inter-American Development Bank calls on policy makers to tax low-cost private schools at lower rates than regular private schools'. It also recommends that school registration requirements be changed for operators like Bridge that 'work on lower budgets', This would, it says, help models like Bridge keep operational costs at a minimum and avoid time lost due to red tape.[3]

Bridge International Academies has had to raise a significant amount of funds from both private and social investors to support its growth.

Bridge has raised a total of US$100 million over the past five years.[4]

It was founded with a $1.8 million investment from the Omidyar Network (founded by eBay founder Pierre Omidyar).

It has received further funding and support from:

Bridge Academies aims to educate 10 million children across a dozen countries by 2025.[9]

As of January 2014, Bridge served 80,000 students in 259 academies, employing 2,700 teachers. At the same time one new academy was opening every second day, with the number of students having multiplied by close to 20 in less than three years.

It currently operates schools in Kenya, Nigeria and Uganda, and plans to expand into Andhra Pradesh in India in 2016.

New regulations introduced in Kenya in 2015 have called into question Bridge's plans to expand further in the country.[10]

In January 2016, Liberia's education minister, George Werner, announced that the country's pre-primary and primary schools will move over to be run by ‘public-private’ partnerships in a $65 million five year programme called “Partnership Schools for Liberia”[11]

Initially Bridge International Academies was to be the only private operator to run 120 schools under the PPP after Werner and Liberian President Sirleaf visited Bridge schools in Uganda and Kenya. After public outcry and international criticism, an additional seven education providers were included and the number of schools in the pilot reduced. These seven providers were chosen by a committee chaired by Werner and advisers from UK schools operator and global PPP champions, Ark.

Many in education and international development have criticised the model of low-cost private schooling of the type offered by Bridge. They argue that while it is understandable that parents want to send their children to private schools, often for lack of alternatives, it is poor public policy to promote them. Education privatisation increases inequality, provides no learning gains, and de-professionalises teachers.

As Kishore Singh, the UN special rapporteur on the right to education writes:

'The cost of privatising education lies not just with school fees but also with the damage done to the public good. Fees, however small, hit the poorest and most vulnerable hardest. Sometimes, this means the oldest son receives an education while daughters stay at home. Inequalities in society grow when the poorest are excluded... The international development agenda must aim to eliminate private schools, not champion them.'[13]

Teaching unions and a number of civil society organisations, such as Transparency International and Action Aid, have asked the government to crack down on schools commercialising education.[14]

Bridge has been criticised for its teaching methods, which favour technology over qualified teachers.

According to a report in January 2016: 'Bridge continues to get criticisms from the Governments of Kenya and Uganda, for its method of using Android mobile phones to teach students where most of the teachers used only use what is placed on the phone... The method is seen in the two countries as discouraging the employment of qualified teachers who will interact with the students while teaching instead of using fixed materials downloaded on a mobile phone'.[15]

President of the World Bank, Jim Yong Kim, praised Bridge in a recent speech for using new technology to help transform educational outcomes: 'Bridge International Academies uses software and tablets in schools that teach over 100,000 students in Kenya and Uganda. After about two years, students’ average scores for reading and math have risen high above their public school peers. The cost per student at Bridge Academies is just $6 dollars a month.'

However, as a group of 100 civil society organisations pointed out in protest: Bridge provides technology only for teachers (as a way of reducing the need for qualified teachers and costs); the test scores cited were from a study financed by the company itself; and finally fees vary by grade, and the $6 mentioned in the speech is the lowest fee charged (Bridge also charges for exams, uniforms, and other expenses). In reality, costs per child range from $9 to $13 a month (plus an additional $7 per month per child for food).[16]

Bridge Academies was co-founded in 2008 by Jay Kimmelman, Shannon May, and Phil Frei.