Barry M. Rubin was an American Middle East expert who over the course of three decades was closely affiliated with the pro-Israel lobby in the United States, as well as being involved in a number of policy institutes within Israel itself. Since the early 1990s he has written a column for the Jerusalem Post and he also maintains a blog called The Rubin Report and was later based at the Interdisciplinary Center (IDC) in Herzliya, Israel. He died in February 2014.

In the first half of the 1980s Rubin was a fellow, and latterly a senior fellow at Georgetown University's Center for Strategic and International Studies in Washington. Rubin had studied his PhD at Georgetown - which he completed in 1978. His thesis, which was published in 1979, was called, 'American perceptions of great power politics in the Middle East, 1941-1947'. The earliest press reference to Rubin being at the Center for Strategic and International Studies was in the Wall Street Journal in November 1979. [1] During his time at Georgetown, Rubin was considered and expert on the Middle East and especially on Iran, and frequently commenting on the Iranian Revolution and the overthrow of the Shah - the US based dictator. [2]

In May 1981 Richard Kessler, a Research Associate at the Center for Strategic and International Studies wrote to the New York Times to complain its critical review of Michael Ledeen's and William Lewis's Debacle: The American Failure in Iran, which Kessler claimed contained, 'several unfair and unwarranted attacks'. Kessler retorted that CSIS was non-partisan and 'represent[ed] diverse viewpoints'. He cited Rubin's study Paved with Good Intentions as evidence. [3] The book, which explored American relations with Iran since the 19th century, received broadly positive reviews in the US press, [4] and argued that American policy on Iran was well intention but failed to properly understand Iranian history and culture; and especially, as the New York Times paraphrased Rubin, its 'tradition of xenophobia and distrust of foreigners'. [5]

In 1984 and 1985, whilst still at Georgetown, Rubin also worked as a Council on Foreign Relations fellow in the office of the Democratic Senator Gary Hart. [6] In May 1985 it was reported in the National Journal that Rubin was leaving Georgetown’s Center for Strategic and International Studies to advise Gary Hart on foreign policy. [7] At the same time Rubin was a fellow at the Foreign Policy Institute of the Johns Hopkins School of Advanced International Studies. [8]In 1989 John Hopkins Foreign Policy Institute published The Politics of Terrorism, Terror as a State and a Revolutionary Strategy. According to a review in the Washington Times, the book was 'is the first of a series of books from the Johns Hopkins Foreign Policy Institute, which will examine the entire phenomenon.' The review said that the 'key chapter' was Rubin's 'Political Uses of Terrorism in the Middle East'. [9]

In 1988 Rubin was appointed a senior research fellow at the Washington Institute for Near East Policy, a spin-off from the American Israel Public Affairs Committee established in 1985 to expand the Israel Lobby's influence over policy.

In around 1994 Rubin joined the Begin-Sadat Center for Strategic Studies, [10] a research institute founded in 1993 by Thomas O. Hecht, described by the Center as, 'a prominent Canadian Jewish community leader' and a 'long-time leader of the Canadian pro-Israel lobby and former president of Israel Bonds and the United Israel Appeal'. [11] Rubin became a senior researcher at the Begin-Sadat Center and was subsequently appointed its Deputy director.

Press reports suggest that Rubin left the Begin-Sadat Center in 2001 to head the Global Research in International Affairs (GLORIA) Center at the Interdisciplinary Center (or IDC) in Herzliya, Israel. The Interdisciplinary Center is a private college with strong connections with the military and intelligence in Israel, particularly through hosting the annual Herzliya Conference [12] and providing a base for the Israeli propaganda operations Stand With Us and HelpUsWin.org. Rubin's GLORIA Center publishes a journal called the Middle East Review of International Affairs and amongst other projects houses the Project for the Research of Islamist Movements run by former Shin Bet head of Research Reuven Paz.

In the 1980s Rubin criticised Reagan's relationship with the Christian right. He was one of a number of figures at a seminar in Washington in 1984, held as part of the five-day international convention of B'nai B'rith. According to the Washington Post participants were 'almost universally critical of President Reagan's linking of religion and politics in a speech at the Republican National Convention'. Rubin said Reagan's statement on religion and politics was 'almost word for word the kind of statements that the Ayatollah Khomeini has made'. [15]

Following Israel's bombing of Tunisia in 1985, the Christian Science Monitor quoted Rubin as saying, 'Here's a clear case where international law has to catch up to new kinds of problems. If the US says it's against international law to retaliate against terrorist acts, the effect would be to foreclose the possibility for retaliation under any circumstances.' [16]

On Obama & the Middle East

Commenting on what he sees as Barack Obama's insistence on 'blaming both parties equally' for the break down of peace talks between Israel and Palestine, Rubin argues that:

This is a recognition of reality and about the most we can expect. Of course, it maintains a determined even-handedness, failing to hint at the easily demonstrable fact that it was the Palestinians who were not interested in making any compromises, even refusing to come to the table at all. But evenhandedness is welcome from an administration that originally seemed set to become the most anti-Israel presidency in history.[17] 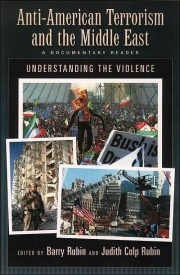