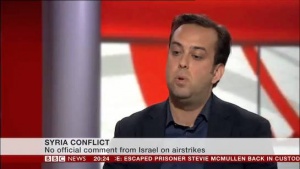 Barak M. Seener is the Middle East section director of the Henry Jackson Society and a researcher at the Institute for Counter Terrorism.[1] according to a CV on gulfoilandgas.com, he is also a "Consultant for the Israel Defense Forces public relations and President's office".[2]

Seener is a former researcher for the Washington Institute for Near East Policy.[4]

Seener is a former research fellow at Policy Exchange and "was responsible for the lectures by former US Undersecretary of Defense Dov Zakheim and other DC analysts such as Patrick Clawson and Joshua Muravchik, along with round-table discussions with a number of embassy officials."[5]

On Britain and Israel

British Jews should have strategized a whole program to promote Israel and reconcile Israel's national-security interests with those of Britain, the way American Jews do. But this is something British Jewry has never done. It has never thought in terms of national security. Instead, it does some poor hasbara [public relations] for Israel. But it shouldn't be engaging in hasbara for Israel per se. It should be conveying that Israel is the bulwark against radical Islamism for Europe at large, and that if Israel's security is undermined, so is that of Europe. If Britain moves away from America's sphere of influence and towards that of the EU, there's no guarantee that it will be pro-Israel. [6]