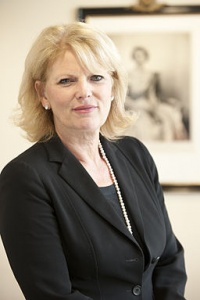 Anna Soubry is the UK minister of state for business and enterprise[1] at the Department of Business, Innovation and Skills, and has been the Conservative Party MP for Broxtowe since 2010. In the 2015 general election she retained her seat with a majority of 4,287. [2] She is the former minister of state for defence personnel, welfare and veterans.

Soubry has said she had been 'persuaded' fracking was a 'good idea' [7] and 'the sooner we get on and do that the better'. [8]

Soubry's constituency includes two oil and gas licence blocks, both awarded to companies by the Oil and Gas Authority under the 14th licensing round in 2015. One of these went to Egdon and the other to Warwick Energy. There are plans for one shale well and to conduct 2D and 3D seismic surveying, but no applications are currently underway. [9]

Soubry has voted both for and against increasing regulations on fracking. [10]

She studied law at Birmingham University and went on to train as a barrister. Soubry worked at Grampian TV in Aberdeen as a reporter and presenter on North Tonight and at Central TV as a reporter on Central News East. She also worked as a criminal barrister in Nottingham and practised until becoming an MP. [6]