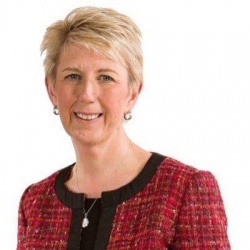 Angela Smith has been the Labour Party Member of Parliament for Penistone and Stocksbridge since 2005. [1] In the 2015 general election Smith retained her seat with a majority of 6,723. [2]

In May 2015, Baroness Smith was appointed as Shadow Leader of the House of Lords.[3]

Smith was appointed to the Environment Food and Rural Affairs Select Committee in November 2015. [4]

Smith's constituency includes three oil and gas licence blocks, awarded to energy companies by the Oil and Gas Authority under the 14th licensing round in 2015. Two were awarded to INEOS and one to Warwick Energy. There are plans for three shale wells and 2D and 3D seismic surveying, but no active applications are currently underway. [5]

The South Yorkshire MP has argued that fracking could be the saviour of the UK's steel industry. [6]

In an article for the New Humanist, Angela writes there should be a 'sensible, mature debate' about fracking, and MPs should consider fracking in a 'rational way and which thoroughly investigates the issues in an open-minded way'. [7]

In October 2016 Smith was appointed vice chair of the (now defunct) All-Party Parliamentary Group on Unconventional Oil and Gas.

Smith has generally voted against greater regulation for the shale gas industry in the UK, and was absent for the key Infrastructure Bill vote in Parliament in 2015. [8]