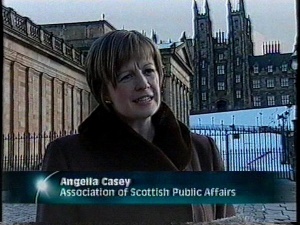 Angela Casey is the managing director of Pagoda Porter Novelli, the firm created by the merger between Porter Novelli International and Pagoda Public Relations.[1]

She is the former managing director of Porter Novelli.

Casey who is a former Conservative Party advisor, working 'for a time with one of the sector's largest practitioners, the London-based Westminster Strategy , where she spent four years. Before working for Mr Portillo, she was PA to Lynda Chalker MP between 1984 and 1987.[2] She was formerly part of Countrywide Political, which then became part of GPC.[3]

A former assistant to two government ministers, Angela Casey has worked in PR and public affairs in Westminster, Brussels and Scotland and has a background in PR and politics at national, UK and international levels. Angela is an expert in crisis and issues communications and has unparalleled experience in improving communication between business and politicians - she currently runs a number of high profile public affairs campaigns. Angela also has a track record of professional service PR having worked with a range of firms to raise their profile through thought leadership and commentary, including: Baker Tilly; Fyfe Ireland WS; WS Society and Hewlett Packard. She has led many successful client programmes and has particular expertise in campaigning and public sector issues, having worked for OSCR, City of Edinburgh Council, VisitScotland and FETA. She is Chairman of the Scottish PRCA – the representative body for the PR industry; a past Convenor of the Association for Scottish Public Affairs; and a member of the Institute of Directors (IOD) Scotland Committee.[4]

'If Parliament creates a register of lobbyists then there is the danger that it'll imply parliamentary sanction to anything we do,' says Casey. 'Any Scottish citizen should have the right to approach their MSP.'[5]

Like so many PR firms when it doesn't suit them, Ms Casey is reluctant to reveal her client list, but I discovered they include the Financial Times, airline bmi british midland and Drambuie. She would also not disclose the industries for whom she lobbies, but one client is Devro of Moodiesburn, the world leader in sausage casings. Is she frightened about giving evidence in the Scottish Parliament today?

"No not frightened, but as I'm speaking on behalf of the industry I want to get it right. We are not a sinister conspiracy. Every business has to articulate its views and its fears. Our politics is an open system. You cannot police access to politicians. If I give straight and honest answers I think MSPs' fears will melt away," she says.[6]

'We are a member of the Association of Professional Political Consultants, and one of the criteria for joining the association is that your company does not pay MPs. Some agencies have decided not to join, so possibly they have links with MPs. Personally, I've been against the idea ever since I worked in the House, years ago. I don't think there's corruption on the massive scale that some newspapers suggest, but there are certainly some relationships which have not yet come to light.'[7]

A day in the life

I'M up at 6.45, when I usually get my two-year-old son, Patrick, out of bed because he is shouting. We have breakfast together before our nanny, Jenny, comes to look after Elinor, who is five, and Patrick. I always put the radio on during breakfast, Radio 4 or Good Morning Scotland, but I never really hear it. It tends to go in one ear and out the other. Jenny, who really is the world's best nanny, comes at 10 to eight, around which point my husband, Michael Brown, and I leave for work. We live in Blackford, so it's about half-an-hour walk into the centre of Edinburgh.

I get into the office at about 8.30, which gives me a chance to do the emails and post before everyone else comes in half-an-hour later. Every day is different... either myself or Michael has to get home for 6.30, when Jenny will be leaving. Sometimes we have to give her a call to stay on a bit longer, but one of us is usually back by then.

Being convenor of the Association of Scottish Public Affairs (ASPA), which is a representative body for all those engaged in public affairs campaigning and advocacy in Scotland, I sometimes have an an ASPA meeting after work. More than 50 companies and organisations have now signed up to the voluntary Code of Conduct and include people from legal firms, consultancies, public sector roles, charities, individuals and in-house private sector roles.

I have had quite a lot of political experience as, in the eighties, I was assistant to Michael Portillo and Lynda Chalker and have worked in public and Government relations in Westminster and Brussels. We have about one hour of playing with the children, because they go to bed at 7.30, and then it's just a quick supper for me and Michael and then it's usually 10 o'clock bedtime for me. Now the kids both sleep through the night, I'm making the most of being able to have a full nights sleep by going to bed early.[8]