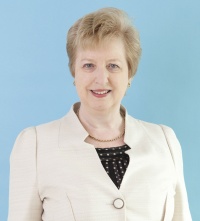 Home Office portrait of Angela Browning, Baroness Browning, taken while she was minister of state for crime prevention and antisocial behaviour reduction in May 2011

Baroness Angela Browning is Conservative peer in the House of Lords, joining in July 2010.[1]

Before entering Parliament, Browning was a teacher, auxiliary nurse and a management consultant. She was also director of the Small Business Bureau (1985-1994), chair of Women into Business (1988-1992) and a member of the Department of Employment Advisory Committee for Women's Employment (1989-1992).[2]

Browning was a member of the Electoral Commission until 2011.

She has worked at health sector consultancy Cumberlege Connections Ltd since 2012 - a firm set up by fellow Conservative peer Baroness Julia Cumberlege.

Since January 2015 she has been the chair of the Advisory Committee on Business Appointments, having previously been a member.[5]

In 2007 Browning claimed £9,365 expenses to pay Parliamentary Liaison Services Ltd, a political research company run by Mark Fullbrook - a former head of campaigns at Conservative Central Office, to set up a seven-page website. The website detailed the work Browning has undertaken in parliament and her constituency. It was claimed by Philip Sweny, a London website designer at Halpen Marketing that setting up a site like the one Browning had should cost no more than £1,250.

She also claimed nearly £7,300, including £1,000 to install two radiator covers, for soft furnishings and decorating her second home a London flat.[6]