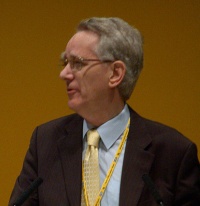 Stunell announced he would be retiring at 2015 general election so would not stand.[2] He was replaced by Lisa Smart who lost the seat to the Conservative Party's William Wragg.[3]

Most recently he served as the parliamentary under-secretary of State at the Department for Communities and Local Government from 2010 to 2012.