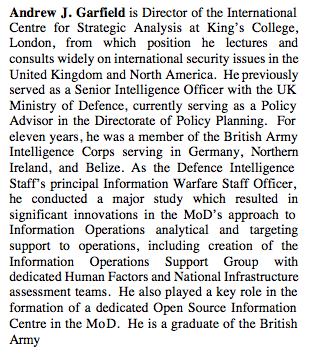 Garfield seems to have been based at Kings College in London, where he was listed as Andrew Garfield (Director, International Centre for Security Analysis) on the Kings College website in 2002. In September 2006 he published an article on the Invasion of Iraq on the American Diplomacy website. His biog at that point read as follows:

But that's not what the Lincoln Group does, says Garfield. The company has been contracted by a psyops division of the U.S. military, but Garfield insists that Lincoln's work cannot be considered psyops. That word, Garfield protests, refers to a military operation. And Garfield is very familiar with military psyops, as he is a former British military and intelligence official who regularly teaches a course at the U.S. Army base at Fort Bragg -- a course on ... psyops.

Garfield's role at Lincoln seems not to be evident on the website of the Lincoln Group, even in the older versions on the Web Archive.