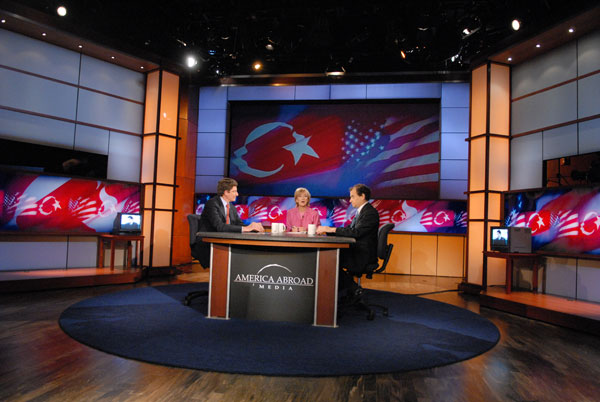 AAM is dedicated to this philosophy - and to independent journalism that is dedicated to the free exchange, informed debate, and critical analysis of ideas. AAM believes in the marketplace of ideas—that journalism in its highest (and truest) form strives to provide citizens with information that will better their understanding of their world and themselves. Founded in 2002 by Dr. Aaron Lobel, AAM has three principal initiatives to carry out our mission.

The three elements are a radio station, a television station and some journalism fellowships, which, now that the cold war is over, will provide "much-needed dialogue between America and the Muslim world." Their web site tells us that the founder:

Prior to founding America Abroad Media, Mr. Lobel was a Research Fellow at the Brookings Institution in Washington D.C.; National Security Fellow at the John M. Olin Institute for Strategic Studies at Harvard University; and a National Security Fellow at the Belfer Center for Science and International Affairs at Harvard's Kennedy School of Government, where he edited Presidential Judgment: Foreign Policy Decision Making in the White House (Hollis Press 2001). Mr. Lobel received a Ph.D. from Harvard University's Department of Government, where he was also awarded the University's top teaching award, the Joseph P. Levenson Prize. He currently serves on the Advisory Board of Business for Diplomatic Action and of Securing America's Future Energy (SAFE), and is a member of the Council on Foreign Relations.

And that it is funded by the following organisations and the quotations are from AAM's description:

To these end AAM has broadcast "America's Funniest Muslim", Azhar Usman, a "Muslim-American comedian, lecturer, and community activist." Thus AAM can proclaim itself "an unparalleled global television series — connecting America and the world for serious discussion about the critical issues of out time." One of which is the pervasive and intrusive nature of US propaganda. 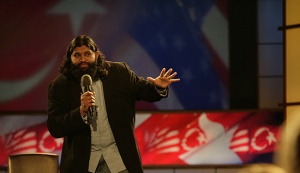 AAM is also a partner of The Atlantic Partnership a similar propaganda operation involving many US and UK diplomats and politicians.

David M. Abshire: President and CEO of the Center for the Study of the Presidency. AAM's biography states that "In 1962, Dr. Abshire and Admiral Arleigh Burke founded the Center for Strategic and International Studies (CSIS)." This ignores the fact that the CSIS was co-founded by Ray S. Cline when he was the deputy director of the CIA or the context (the aftermath of the Bay of Pigs invasion). It does not mention Layalina which uses the offices of CSIS to produce its propaganda material. It does mention that Abshire served as a Special Counselor to President Reagan and was the U.S. Ambassador to NATO from 1983 until 1987, but omits his role in the cover-up of Iran/Contra, setting the tone for a list of very partial biographies.

Michael Armacost: Shorenstein Distinguished Fellow, The Asia Pacific Center at Stanford University, Armacost was President of The Brookings Institution in Washington DC from 1995 until July 2002. In the 70s he held senior Asian affairs and international security posts in the State Department, Defense Department, and the National Security Council. U.S. Ambassador to Japan from 1989 to 1993, Under Secretary of State for Political Affairs from 1984-1989, and Ambassador to the Philippines from 1982-1984. He is part of Project Syndicate. Armacost joined The Asia Foundation's board of trustees in 1994. The NNDB site states that he is also a member of Member of the Board of AFLAC (1994-), Applied Materials (1993-), Cargill, TRW (a Defense contractor), USEC (2002-)NNBD states this was "Formed 1992 by the US Government as the United States Enrichment Corporation, to provide low-enriched uranium (LEU) for private industry"), American Academy of Diplomacy, Aspen Institute, Bill Bradley for President, Bohemian Grove, Bush-Cheney '04, Council on Foreign Relations, George W. Bush for President, Hoover Institution, McCain 2000, National Committee on US-China Relations Board of Directors and the Trilateral Commission.

Henry Catto: Chairman, The Atlantic Council of the United States and the vice-chairman of the Aspen Institute.

Ken Duberstein: Chairman and CEO of The Duberstein Group, Duberstein served as U.S. President Ronald Reagan's White House Chief of Staff from 1988 to 1989.

Richard Haass: President of the Council on Foreign Relations.

Carla Hills: Chairman and CEO, Hills and Company a Washington D.C.- based consulting company that advises clients on international trade and investment issues

Stanley Hoffman: Paul and Catherine Buttenwieser University Professor, Harvard University, he was the Chairman of the Center for European Studies at Harvard from its creation in 1969 until 1995.

Aaron Lobel: founded America Abroad Media (AAM) and serves as the organization's president and chairman of the board, as well as executive producer of America Abroad and AAM Television.

Richard Lugar: United States Senator from Indiana and the longest serving senator in Indiana history, having being elected to a fourth term in 1994.

Felix Rohatyn:President and Chairman of Rohatyn Associates, LLC. He previously served as the U.S. Ambassador to France under the Clinton Administration from 1997-2000.

Dennis Ross:Distinguished Fellow and Counselor at The Washington Institute for Near East

James Steinberg: is the Dean of the Lyndon Johnson School of Public Affairs at the University of Texas.

Strobe Talbott: succeeded Michael Armacost as President of the Brookings Institution in July 2002.

James Q. Wilson: is the Ronald Reagan professor of public policy at the Pepperdine School of Public Policy in California, and a professor emeritus at UCLA.

Dr. Philip D. Zelikow: is currently the White Burkett Miller Professor of History at the University of Virginia.