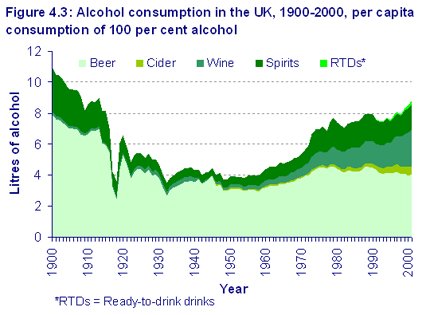 Misuse of alcohol costs the NHS around £1.7Bn a year. Binge drinking, in particular in younger age consumers, is seen as a major problem. In the UK 24% repeatedly have more than 5 drinks when they do drink; and a further 25% have between 3-4 drinks in one sitting. [3] In addition to this 'almost half of victims of violent crime believe the offender to be under the influence of alcohol and just over a quarter of all people think that drunk and rowdy behaviour is a problem in their area' [4] Much of this misuse is preventable. [5] However liberalisation of alcohol regulations and the increasing affordability of alcohol have serious undermined UK alcohol control policy.

In order to reduce alcohol related harms there is clear evidence that controlling the price and availability of alcohol and restricting marketing and promotion are the most effective measures. [6] Licensing and taxation are part of UK alcohol control alcohol, however, licensing has been dramatically liberalised and according to Scottish Health Action on Alcohol Problems (SHAAP) alcohol has become dramatically more affordable:

Responsibility for developing and implementing alcohol policy is spread across a range of stakeholders. The Home Office has responsibility for licensing, in England and Wales, for policing and for the 2012 alcohol strategy consultation which considers the merits of a minimum price for alcohol. [8] Scotland has devolved responsibility on most alcohol related issues with the exceptions of labelling, age restrictions, advertising and taxation. The Treasury has responsibility for setting the duty rates applied to alcohol for the whole of the UK, the ministry for justice, Department of Health, Department for Environment Food and Rural Affairs, Department for Work and Pensions are among the twenty government departments with an interest in alcohol policy. Some ministerial departments have an interest in reducing the harm caused by excessive alcohol consumption; while others have an interest in promoting alcohol for economic ends.

Alcohol advertising regulations are overseen by the Advertising Association and the Portman Group both represent the interests of commercial actors. Increasing the Department of Health has invited stakeholders from the alcohol industry and other commercial sectors to become involved in reducing alcohol related harm. The Responsibility Deal Alcohol Network has become a platform within the health strategy to deal with alcohol related issues. Critics have argued that the Network is skewed in favour of commercial interests and gives little scope for effective action on health. UK alcohol licensing and social disorder policies typically focus on reduction (immediate or short term for example confiscation of alcohol by police), containment or the displacement of alcohol related problems. Priorities include controlling excessive noise, antisocial behaviour, or underage drinking. Containment aims to control the drinking environment for example in the licensing of outdoor beer gardens in pubs and at events that allows authorities to keep a certain degree of control over drinkers. Displacement includes actions such as the introduction of the Alcohol Bylaws that forbid people from drinking in public places. [9].

In addition there is the problem of differing uses of terminology and the confusion this casts across survey samples. This, of course, subsequently affects the analysis of the data. In addition to this the constant shift of responsibility for recording data with regard to alcohol consumption means that it is almost impossible to see any trends emerging. Despite this, however, some good information does exist.