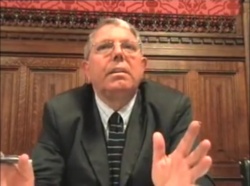 Alan Meale has been the Labour Party MP for Mansfield since 1987. [1]

‬Meale's constituency includes six oil and gas licence blocks, awarded by the Oil and Gas Authority under the 14th licensing round in 2015. Five shale licenses were awarded to INEOS and one abandoned mine methane vent licence went to Alkane Energy. There are plans for four shale wells, one hrz frack well and 2D and 3D seismic surveying; no applications are currently underway. [3]

Meale has said he opposes fracking due to the potential for contamination it poses on water supplies. [4]

Meale has been absent for most votes on fracking. [5]