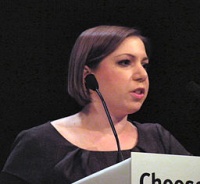 Teather left the Government in September 2012.[3] A year later, she announced that she had decided to quit Parliament because she could no longer pretend to support the Coalition or Nick Clegg’s leadership.