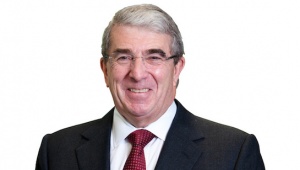 As BAE Chairman, Carr has argued that the sale of arms to the Sauds by his company is an important step in promoting peace in the region. Yet BAE's Eurofighter jets have played a key part in Saudi Arabia's bombing of Yemen, creating what Campaign Against the Arms Trade's director Andrew Smith calls a 'terrible humanitarian catastrophe'.

'We try and provide our people, our government, our allies with the very best weapons, the very best sticks they can have, to encourage peace,' said Carr.

While the House of Saud's economic situation grows increasingly fragile, BAE has been a key beneficiary of their region's instability. Its last annual report stated 'in Saudi Arabia regional tensions continue to dictate that defence remains a high priority.'

Despite the kingdom's well publicised human right's abuses, Carr maintains an amoral stance on his customer's behaviour: Saudi Arabia is simply 'a very important customer of which we have a very strong relationship.'

Carr has previously held senior appointments as chairman of Centrica plc (2004-2013), Cadbury plc, Chubb plc, Mitchells & Butlers plc and Thames Water plc; deputy chairman and senior independent director of the Court of the Bank of England; president of the Confederation of British Industry; and chief executive of Williams plc.

He was appointed chairman of BAE Systems plc on 1 February 2014.[1]

Carr was appointed vice-chair of the BBC Trust in March 2015 because he 'fits the government's keenness to introduce more trustees with business and financial backgrounds"'.[2] In response to Carr's appointment Campaign Against the Arms Trade (CAAT) launched a petition calling for him to step down suggesting 'the arms dealer’s appointment could pave the way for the broadcaster to whitewash the arms trade’s destructive impact across the globe'.[3]

Carr donated £8,255 to Britain Stronger in Europe, the official 'Remain' campaign group which attempted to persuade voters of the case to stay in the EU in the membership referendum on 23 June 2016. [4]