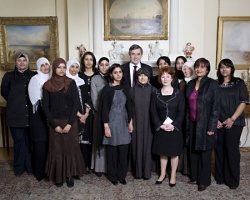 Picture of members of the NMWAG with Prime Minister Gordon Brown and Communities Secretary, Hazel Blears at 10 Downing Street on 21 November 2007 for the launch event of the group. Note RICU operative Sabin Malik in the back row, immediately to the right of Hazel Blears.[1]

The National Muslim Womens Advisory Group (NMWAG) is an initiative set up by the Department for Communities and Local Government in November 2007 to "influence and challenge the false and perverted ideology spread by extremists and give our young people the skills and knowledge to turn their backs on hate".[2] In essence, the NMWAG is one "part of a grassroots counter-terrorism strategy"[3] that has been "set up by Communities and Local Government as part of its work to prevent violent extremism."[4]

The NMWAG was made up initially of 19 women, who 'represent a wide spectrum of communities, professions and traditions' who will not only work toward preventing violent extremism, but toward 'discuss[ing] issues and concerns...[that] affect Muslim women, for example access for women to mosques and their management committees and cultural barriers including honour crimes and forced marriages'.[2]

According to the DCLG, the specific remit of the NMWAG will be to:

The BBC reported in January 2008 that certain members of the NMWAG had informed the BBC that they had faced "direct criticisms" from within their communities that "they [were] being recruited to inform for government".[5] The BBC also reported that "Muslim women tend to be more marginalised than men - and in some communities face an uphill struggle to be heard outside their own homes."[6]

The Shadow Cabinet Minister for Social Cohesion, Sayeeda Warsi, criticised the NMWAG for being a group that was dividing communities and suggested that the creation of the group was "patronising because it says to Muslim women you can only engage with us as Muslim women and not as individuals.”[7]

In April 2010, one of the NMWAG's founding members resigned. Shaista Gohir, chief executive of the Muslim Women's Network UK, said she had become “disillusioned” with the initiative, which she now felt was a “political fad.” She outlined in a letter to Communities Secretary John Denham several factors prompting her resignation, including "the inactivity of NMWAG to collectively influence policies, lack of strategy to channel Muslim women’s view to the Government and its links with the Prevent agenda."

Gohir said she spoke out despite receiving government funding because she believed the NMWAG "had failed", and she could not “see sufficient justification to continue". “The funding has helped us build our capacity but NMWAG has not worked and women should be empowered through mainstream processes and I didn’t want to shy away from this... Despite recent efforts to make the group more active, I feel it is too little too late.”[8]

In her blog Gohir summed up her frustrations:

The failure of this initiative highlights that the government is not serious about the role of women in influencing public policy. For example, initiatives are often launched to encourage women into public life, but are not matched with resources to support them. Women’s empowerment ends up becoming a tick-box exercise. [9]

Gohir had also authored a damning report about the Government’s Prevent agenda, saying it was stigmatising all Muslims and questioning whether it was the right way to address violent extremism. [10]

The recruitment to NMWAG was not, according to Naaz Rashid: 'open and transparent; the original members were invited to join.' She writes:

As a result, the group consisted of those women who were already known to government through their involvement in particular policy areas and who were invited to apply. Shaista thought that she “... was one of the people that was invited because I was probably sitting there round the table”. Similarly, Shahien told me:

I was on the Home Office working group...and that came to an end but erm I was known to government, and I was still ongoing-ly involved, I’d be asked to go to meetings, consultations, give my views on different things and out of the blue I got this email to say that this is what’s happened and we’d like to invite you on the group and that’s all I can tell you and that’s it. (Shahien)

Further, they were then asked to nominate others in a snow ball effect (or, according to CLG’s Muslim Women’s Engagement Officer, NMWAG’s membership was guided by the “principle of recruiting people of renown and then getting recommendations from them”.) Not only was this process not open, it was skewed in favour of those individuals already known to government officials because they were working on policy areas which were already the target of government attention, such as forced marriage. As well as setting the agenda (in terms of narrowing the issues which were apparently relevant to Muslim women), the routes to engagement were heavily prescribed by government.

The second round of recruitment was ostensibly designed to be more transparent since there was an open application process. According to the CLG’s Muslim Women’s Engagement Officer, central government had publicised membership through the regional Government Offices and Local Authorities who had much better knowledge of local communities. This was the route through which Kalsoom was recruited. She told me, “I was asked to apply, I think I had an invitation from a local government officer saying that this was something you might find interesting, so I applied and I was told I was selected because of my experience at grassroots.” Shaista, already a member of NMWAG by then, told me, however, that she also contacted a number of people and encouraged them to apply. She claimed that of the seven who were recruited to join NMWAG in the second round (out of forty applications in total), four were candidates that she had suggested apply. They may also have been invited to apply by Government Offices or Local Authorities, but this reflects the narrow pool of suitable candidates. The final decision regarding the women who were recruited was made by officials working in Prevent and DCFS, rather than Ministers.[11]

The following names are of the 19 initial members of the NMWAG: [12]

Later several other members were appointed including Kalsoom Bashir, at that stage community cohesion officer and then Prevent lead at Bristol City Council.[13]