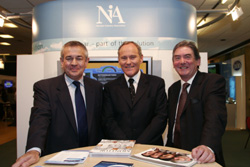 Malcolm Wicks (1947-2012) was a British Labour Party politician from 1992 until his death in September 2012. He served as a minister under Tony Blair.

Wicks stepped down from government in 2008 and spent two years as the prime minister's special representative on international energy issues. He was also made a member of the Privy Council.[2]

As Minister for Energy, Wicks led the Energy Review announced in November 2005. According to Wicks: "The Energy Review is taking place against a background of strengthening evidence on the nature and extent of climate change and increasing concerns about the future security of UK energy supplies. This is the right moment to assess where we are in relation to achieving the goals set out in the 2003 Energy White Paper".

He continued: "The Review will explore all the options open to us taking into account the important international context. There will inevitably be some difficult decisions and trade offs to be made in arriving at the right package of policy proposals. It is crucial that we stimulate a wide-ranging and informed debate and engage the public, business and industry throughout the process as well as academic, private sector, scientific, NGO and other experts".[3]

How neutral on nuclear?

Wicks quietly pleased the nuclear industry with his positive comments over nuclear energy, whilst attacking anti-nuclear activists. At a fringe meeting at the Labour party Conference in 2005, Wicks spoke at a meeting organised by the Nuclear Industry Association (NIA). According to the NIA, Wicks "indicated again the commitment of the Government to ensure nuclear energy would be considered as part of this process".[4]

In February 2006, The Guardian reported how, although Wicks was supposedly "neutral" about nuclear power, he "just can't help himself slagging off anyone who argues that Britain can do without it. Last week he was talking to the Scottish press about Germany's plans to shut down its nuclear plants. 'I would at least hope that the environmental fundamentalists would ... think through the implications', he said. Asked to identify those 'fundamentalists, he said: 'I mean people who are so committed to the environmental agenda but who imagine that the answer can be windmills and some tidal power and some solar power and some recycling.' Wicks's balanced energy review will be presented to Tony Blair in the summer."

The Guardian continued: "In the meantime, perhaps Wicks could inform the public about the mysterious public consultations that the Department of Trade and Industry is supposed to be holding on the energy review. So far there have been no announcements, no postings on the website and no reporting of what was said by whom to whom".[5]

A clean source of power?

During his February 2006 Scottish visit, Wicks also said: "Our paramount concern (is) to have an energy supply which is clean, and nuclear is a clean source of energy." In response, the Scottish National Party and the Scottish Greens accused Wicks of "hysterics" and of spinning a pro-nuclear line from London.[6]

Just months before Wicks said nuclear was clean, he was said to be shocked at the way nuclear waste had been handled and stored. Quoted in the New Stateman he said: "I think it is an absolute disgrace that the industry, governments, parliaments have not confronted this legacy before. There is a huge irresponsibility which a lot of people should take responsibility for, by which I mean governments of different political hues over several decades."[7]