Difference between revisions of "Jeremy Corbyn"

Jeremy Corbyn has been the Labour Party Member of Parliament (MP) for Islington North since 1983.[1]

In September 2015 he overwhelmingly won the Labour leadership contest and was appointed party leader.

Support for a ban on fracking 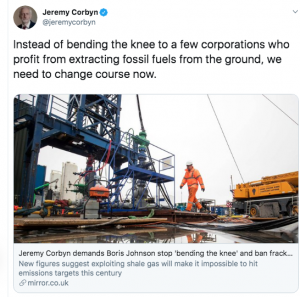 In July 2019 Corbyn visited campaigners protesting outside Cuadrilla’s shale gas site near Blackpool and repeated his call for the government and incoming PM Boris Johnson) to ban fracking:

“Instead of bending the knee to a few corporations who profit from extracting fossil fuels from the ground, we need to change course now. It’s the next generation and the world’s poorest who will pay the price if this Conservative government continues to put the interests of a few polluters ahead of people.” [2]

In June 2015 Corbyn announced he would stand as a candidate to succeed Ed Miliband as the leader of the Labour Party, and would do so on a 'clear anti-austerity platform'.[3]