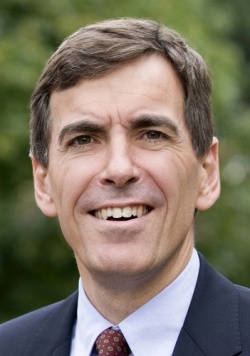 David Rutley has been the Conservative Party Member of Parliament for Macclesfield since May 2010. [1] In the 2015 general election Rutley retained his seat with a majority of 14,811. [2]

Rutley was appointed parliamentary under secretary of state at the Department for Environment, Food and Rural Affairs (Defra) in September 2018. He has also been a Government Whip since June 2017 and is Lord Commissioner of HM Treasury

Previously he was a parliamentary private secretary to the secretary of state for work and pensions Iain Duncan Smith from May 2015.[3]

Before entering politics, Rutley spent much of his career as a senior business executive for big companies such as Asda, PepsiCo International, Halifax General Insurance and Barclays. He also served as a special adviser from 1994 to 1996 he worked as a Special Advisor at the Treasury, the Cabinet Office and the Ministry of Agriculture. [4]

Rutley's constituency includes one oil and gas licence blocks, awarded to INEOS by the Oil and Gas Authority under the 14th licensing round in 2015. There are plans for one shale well and 2D and 3D seismic surveying; no applications were underway as of November 2016. [5]

Rutley has generally voted against increased regulation on fracking. [6]