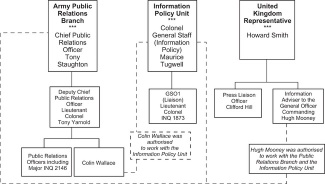 Colin Wallace was a covert propagandist working undercover in Information Policy inside British Army headquarters in Lisburn outside Belfast in the early 1970s.

The Barron Report on the Dublin and Monaghan bombings included this assessment of him:

Colin Wallace was a civil servant engaged in propaganda and psychological operations work for the security forces between 1972 and 1975, when he was removed from Northern Ireland, ostensibly for safety reasons. He was then disciplined for attempting to pass restricted information to a journalist, and asked to resign from the Civil Service. In 1980 he was convicted of manslaughter following the death of the husband of a work colleague. He was released on parole in 1986. In 1990, the British Government admitted for the first time the true nature of Wallace’s work in Northern Ireland; a subsequent inquiry found that he had been unjustly removed from the Civil Service and he received compensation. Following this, his manslaughter conviction was referred to the Court of Appeal by the Home Secretary, and was subsequently quashed.

Based on his knowledge and experience, Wallace claims that the security forces in Northern Ireland knew the names of those most likely responsible for the bombings within days of the attacks taking place. He believed then and now that some of those involved had links with either the RUC Special Branch, military intelligence or MI5. Finally, he believes there are reasons for suggesting that elements of the security forces acted to discourage a proper investigation into the bombings, in order to protect certain loyalist extremists.

When speaking of matters directly within his own experience, the Inquiry believes Wallace to be a highly knowledgeable witness. His analyses and opinions, though derived partly from personal knowledge and partly from information gleaned since his time in Northern Ireland, should also be treated with seriousness and respect.[1]

When Wallace was suspended without pay in July 1975, he was mistakenly sent a letter with a Whitehall circulation list on it:

Apart from Sir Michael Cary, the Permanent Secretary at the MoD, it included General Sir Peter Hunt, the Chief of the General Staff; Ronald Kent, deputy Under-Secretary (Army); Major- General John Woodrow, director of security (Army); John Groves, Chief of Public Relations, MoD; John Waterfield, an Under-Secretary at the Northern Ireland Office; and a "B Sheldon".
Bernard Sheldon, 65, who came to public notice as MI5's legal adviser during the Spycatcher affair, retired in 1987.[2]