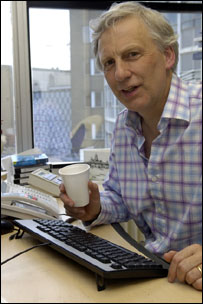 Barney Jones is a BBC journalist and former advisor to Editorial Intelligence. He is currently the editor of BBC One's Andrew Marr Show, the BBC's flagship political programme.

Jones started his career as Director of Communications for the National Union of Students and then joined the BBC in 1984 as a reporter based at the House of Commons, before working on Newsnight, the TV news, Breakfast News and the 1992 General Election.[1]

In 1993 Jones devised, piloted and produced the predecessor to The Andrew Marr Show, ‘Breakfast With Frost’. His BBC Press Office biography list career highlights as a "joint interview with Bill Clinton and Tony Blair, getting Elton John into the studio the morning after Princess Diana's funeral, and getting Nelson Mandela dancing in the Breakfast With Frost studio at the end of his interview.” [2]

Jones was a member of the Advisory Board of the PR firm Editorial Intelligence, but was reportedly forced to resign by the BBC. "The Sunday Times reported that BBC forced Barney Jones and Kirsty Lang to quit after learning that they would be paid £1,000 to hold the position and £200 to attend its seminars [3] According to The Independent, Jones was one of "At least six top journalists have resigned from EI's advisory board amid claims of potential conflicts of interest arising from offers of money in return for advice and sitting on panels".[4]