Andy Coles (born February 1960) is the Deputy Police and Crime Commissioner for Cambridgeshire and Peterborough. He was previously a Detective Inspector with the Metropolitan Police and served with ACPO TAM.[1] It was revealed in a book by his brother that he had been a Special Branch undercover,[2] now determined to be Andy 'Van' Davey, who infiltrated animal rights groups in London 1991 to 1995. The story broke on 12 May 2017 when 'Jessica', a woman he targeted for a relationship while undercover came forward to tell her story, with calls for his resignation following.[3]

This pages sets out his police and post-police career in politics. For the account of his activities while undercover see

Update of 15 May 2017: Following media exposure of his time as an undercover police officer over the weekend of 13 May 2017, Andy Coles resigned as Deputy Police and Crime Commissioner for Cambridgeshire, effective immediately. The case was also referred to the Independent Police Complaints Commission.[4]

Update of 19 March 2018 The Inquiry confirmed that Andy Coles was undercover officer HN2.[5] On the same day, the Inquiry released the Tradecraft Manual, and revealed that it was authored by Andy Coles in 1995,[6] In response, Coles has broken his silence,[7] and issued a statement denying 'Jessica's' testimonies about their relationship.[8] She is preparing legal steps.[9]

Update of 29 April 2019 When out flyering in Petersborough as they have done every month, Jessica and her volunteer were assaulted by Andy Coles. They have reported the incident to the police.[10]

Update of 25 February 2020, police uphold Jessica's complaint that she had been deceived into a relationship by Coles, saying the complaint was credible and and had he still been in post he would have had a case to answer. Coles had denied he had a relationship with her.[11][12][13]

Most of what is known about his career comes from Andy Coles as a source; the timeline needs more detail. In his personal statement for the role as Deputy Police and Crime Commissioner, Coles gives a summary of his career: [14]

The majority of my professional career was spent as a police officer in the Metropolitan Police Service. I have had wide experience in a series of specialist policing roles, from basic beat policing to neighbourhood policing, youth and community work, to public order policing. I have a depth of experience in specialist roles such as in police intelligence functions, surveillance duties, working as an Authorised Firearms Officer and developing effective liaison with external agencies.

Protect. Coles was 'also involved in the national counter terrorist Protect programme, where I reviewed joint force responses to a complex counter terrorism exercise in the West Midlands.'[14] 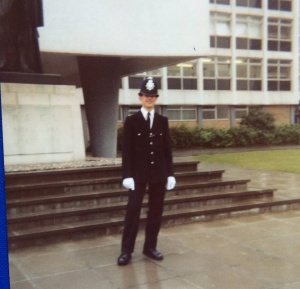 On his LinkedIn profile, Coles lists counter-terrorism and security operations among his skill set. He also states that he had two periods with the Association of Chief Police Officers where he worked on national units.[1][15] In his personal statement, he adds:[14] 'During my career I was responsible for leading the delivery of counter terrorist training to specialist officers across the United Kingdom on behalf of the Association of Chief Police Officers, working closely with colleagues in the Security Service to make certain that both agencies could work effectively together in extremely high risk operations against terrorists.'

His work for its' Terrorism and Allied Matters Commttee (ACPO TAM) raises the question of his links to senior police officers who play a considerable role in the spycop scandal, as it was ACPO TAM which oversaw the unrolling of Special Demonstration Squad tactics to the rest of the country. For instance, the Controller of Operations for Special Branch in 1995, Barry Moss, who later with Roger Pearce (another former SDS undercover) was instrumental in establishing the national spycop agency, the National Public Order Intelligence Unit.

In the second period that Coles served with the Terrorism and Allied Matters Committee, it was chaired by Assistant Commissioners Bob Quick and John Yates; Vice Chairs included Norman Bettison & Sara Thornton. ACPO TAM was also the unit which ran the National Undercover Working Group. During the period Coles was there, ACPO TAM oversaw the National Domestic Extremism Unit, which by then included the spycop unit National Public Order Intelligence Unit. APCO TAM was also at the time overseeing the development of PREVENT and related counter-terrorism programmes.

According to a 2015 article in the Peterborough Telegraph:[21]

Councillor [Andy] Coles spent 30 years with the Metropolitan Police working in counter terrorism where he advised ministers on the radicalisation of young people in schools. He also spent time working closely with local authorities on difficult and complicated child protection matters.

Coles is an active member of the Conservative Party. In May 2015 he was elected to the Peterborough City Council as a councillor for the Bretton South Ward, and following the 2016 boundary changes, for the Fletton and Woodston ward. From July 2015 to May 2016 he was member of the council cabinet as a Lead Member with responsibility for Children Services.[1][22] He joined the Police and Crime Panel for Cambridgeshire and Peterborough in 2015, and was elected Vice Chair circa January 2016. He resigned from the Panel in July 2016.[22][23] 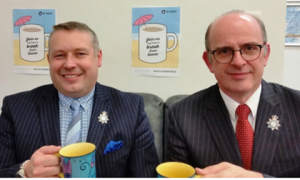 On 5th July 2016 Coles took up the position of Deputy Police and Crime Commissioner for Cambridgeshire and Peterborough.[22][24] He was personally selected for the role by Jason Ablewhite, who had just been elected as the Commissioner.[24][25][26] He resigned on 15 May 2017, effective immediately following his exposure as a former spycop who acted inappropriately targeting female activists.[7] Still a Tory Councillor for Petersborough, the Annual Council Meeting held a week after his resignation quietly removed him as the Conservative Group Press Officer.[27] 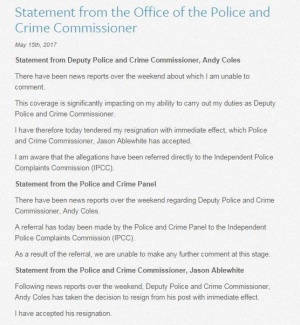 Resignation statement of Andy Coles as Deputy Commissioner for Police and Crime for Cambridgeshire, 15 May 2017.[7]

With a background in sales and management in the food industry, Jason Ablewhite had been Chair of the Police and Crime Panel for Cambridgeshire and Peterborough, a councillor for St. Ives for 16 years (including Mayor in 2005). A Conservative Party member, he was Leader and Chief Executive of Huntingdonshire District Council from 2011 to 2016.[28][29] It is notable that St. Ives is close to the site of the significant local employer, vivisection company Huntingdon Life Sciences, a long time focus of animal rights campaigners. As a result, the small town has seen various protests by Stop Huntingdon Animal Cruelty during the period Ablewhite was a civic leader there.

As mentioned above, and in more detail on the Andy Davey page detailing his undercover deployment - Coles stepped down from his role as Deputy Police and Crime Commissioner with immediate effect after his past as an undercover officer had been exposed. The Metropolitan police referred the case to the Independent Police Complaints Commission, which in August 2017 decided no involvement of the IPCC was required.[35]

Coles is still a councillor for Fletton and Woodston for the Conservative Party. A campaign has been set up calling for his resignation as an elected member with protests at Peterborough Town Hall. During the first council meeting after Coles' exposure, a banner was hung from the public gallery. The protesters refused to remove it until Coles had left the room.[36] The public gallery has since been closed, while pickets were held outside the Town Hall during every monthly council meeting since.

For almost a year after his exposure, Coles declined to make a statement to media.[7] After the Undercover Policing Inquiry confirmed that he had been an undercover officer (see below), he issued a statement denying 'Jessica's' testimony's about their relationship:[37]

I am also pleased to confirm that both the IPCC and the Metropolitan Police have investigated the lurid claims made by a woman using the pseudonym “Jessica” and have told me I face no charges or any further investigation into her allegations, which I am now able to deny publicly.
The right place to make further comment in this case is in the Public Inquiry where I welcome the opportunity to give my evidence in due course.

Jessica has countered the lies in Coles statement, and is preparing legal steps.[38]

The campaign Sack Andy Coles has its own website. It aims to make Coles step down from his other public functions too. Flyers have been spread in his ward, and at schools where he is still on the board to raise awareness of the situation. 'Jessica' has also spoken at events in Petersborough and elsewhere.

After hearing defences of his behaviour and false claims about it, they dealt with those in a detailed briefing issued to every member of Peterborough City Council.

Coles assaults Jessica and her volunteer

With a local election coming up in May 2019 (Coles is not up for re-election, but his wife is standing as a Tory candidate), Jessica and a volunteer were out leafletting on Monday 29 April 2019, when they were assaulted by Andy Coles. He filmed them from close by while shouting at them, he grabbed the leaflets, bending the volunteer’s fingers backward and ripping the bag. He then said ‘I’ve got your fingerprints, you’re going to jail’.

The volunteer was taken to hospital where they were found to have rendon tissue damage in one hand but thankfully nothing broken. They have reported it to the police, who are treating the incident as ‘assault causing actual bodily harm’ (ABH).[10]

For a long time, little was known about the undercover codenamed 'N2' or 'HN2' - even though Andy Coles had already been exposed as 'Andy Davey' - which happened in May 2017.

Confirmation and author of Tradecraft Manual

On 19 March 2017, the Undercover Policing Inquiry confirmed that Andy Coles was undercover officer HN2.[45] On the same day, the Inquiry released the Special Demonstration Squad Tradecraft Manual, and revealed that it was authored by Andy Coles.[46] The date of publication of the manual is February 1995, which means that Coles must have written it while still undercover. His departure as Andy Davey happened at the same time, a leaving do organised by his activist friends took place on 22th that month.

In the Tradecraft Manual, at several instances, Coles refers to his own experiences while undercover. A detailed overview will follow.

Coles was mentioned in the first Operation Herne report under the cipher 'N2'. There it was noted he was a former SDS undercover and later a cover officer, and now retired:[20]

In 1988, he married and had two daughters; he subsequently separated and remarried.[47] He is an aspiring author, and in 2013 was writing a historical novel about an undercover officer infiltrating radical groups in the 1830s.[48]

He is a supporter of the Saluki Welfare Fund and, he and his family have two Saluki rescue dogs.[22][15] Just after retiring from the London police he was 'setting up two social enterprises involved in Peterborough Area Top Bar Beekeepers, working with others to build a network of bee folk who are interested more in honeybee survival than honey production, and have a hive on felow project dirt project the Green Backyard.'[49]

Upon stepping down on 15 May 2017, Coles took down most of his personal social media accounts.