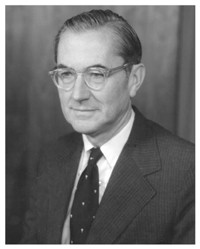 William Colby was Director of the Central Intelligence Agency from 1973 to 1976.

Colby served as an OSS "Jedburgh" in France before being parachuted into Norway in late 1944.[1]

Colby joined the CIA in November 1950. His first assignment was in the Western European Division, of the Office of Policy Coordination (OPC). In 1951, he became the OPC's representative in Stockholm.[2]

In 1953, he was assigned as a political action officer in Rome, at the Deputy Directorate for Plans (DDP).[2]

He was appointed Deputy Chief, Far East Division, DDP, in 1962, becoming chief of the division later the same year.[2]

In 1968, he was assigned to the Agency for International Development as Deputy Director of Civil Operations and Rural Development (CORDS), Saigon. Later the same year, he was appointed Director, CORDS (with the rank of Ambassador), Vietnam.[2]