The Wellbeing Alliance, ‘a team of social entrepreneurs who live in Scotland and work throughout the UK.’

The Wellbeing Alliance is a Not For Profit company registered at Companies House (No. SC 435567 – date of incorporation 26 October 2012).

It is based at 11-12 Newton Terrace, Glasgow – the same address as lobbying firm Quorate Public Affairs.

According to its website the alliance is ‘ a team of social entrepreneurs who live in Scotland and work throughout the UK.’ The website does not, however, disclose the name of anyone that works for it and its ‘Chief Executive’ Jacquie Forde is joined as a director of the company by her husband Jeremy Forde and one of her daughters Nicola Forde.[1]

Jacquie Forde had previously setup Health Inequalities Alliance, a not for profit company, in 2010 but 'parted ways with her business partner (another story)'[2] and left the Alliance in December 2012 after becoming director of its successor the Wellbeing Alliance and director of the lobby firm Quorate Public Affairs.

The stated aim of The Wellbeing Alliance is:

...to play a key role in contributing towards an improved level of health and wellbeing for Scotland and the UK population. We will achieve this through delivering a range of projects and campaigns with our partners. We also aim to help improve the healthy life expectancy of our citizens, which could make a significant contribution to the national economy.[3]

The Wellbeing Alliance carries out work in the following areas:

Commercial and Third Sector projects, programmes and campaigns are the primary means by which the organisation is funded.[3]

Call for probe into health forum link to Big Pharma

On 2nd March 2014 the Sunday Herald reported that Holyrood's Standards, Procedures and Public Appointments Committee had been asked to probe two Cross-Party Groups (Cross-Party Group on Health Inequalities & Cross-Party Group on Chronic Pain) administered by Jacquie Forde of the Wellbeing Alliance because of her links to the pharmaceutical industry. Forde's other firm, Quorate Public Affairs, has the same Glasgow address and was created in the same month as the Wellbeing Alliance. The Sunday Herald reports:

Forde is listed as secretary and treasurer of the CPG on health inequalities and secretary of the chronic pain group.

She is also the sole shareholder of the Wellbeing Alliance, a not-for-profit social enterprise set up in October 2012 which lists its address as Newton Terrace in Glasgow.

Its website describes it as a team, of "public health trained social entrepreneurs who want to make a difference".

Forde's other firm, Quorate Public Affairs, has the same Glasgow address and was created in the same month as the Alliance.

Until recently, Forde's social media profile said of Quorate: "We provide high quality public relations and political lobbying services and our team have decades of experience working in and around the disciplines of Pharma, NHS, Media, Politics and Charities."[4]

The Cross Party Group in Health Inequalities discloses the following in its most recent report:

In its March 2013 report, the Cross Party Group on Chronic Pain stated that 'Jacqueline Forde of the Health Inequalities Alliance' was elected unopposed as secretary on May 23 2012.[6] In its subsequent report in June 2013 it notes that:

Secretariat support supplied on a voluntary basis by Jacquie Forde.[7]

The Wellbeing Alliance provided the following resources to the Cross Party Group on Chronic Pain:

A Parliament spokesman said: "Cross-party groups must comply with the Code of Conduct and declare who provides its secretarial support. Where that support is provided by a consultancy or public affairs firm, the SPPA Committee has the power to require the organisation to disclose its full client list."[4] 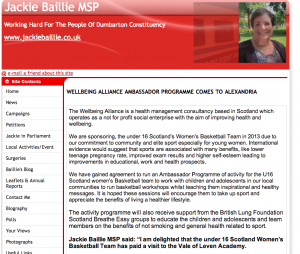 The Wellbeing Alliance sponsored the under 16 Scotland’s Women’s Basketball Team in 2013. Jackie Baillie, MSP for Dumbarton said: “I am delighted that the under 16 Scotland Women’s Basketball Team has paid a visit to the Vale of Leven Academy."[8] The Wellbeing Alliance, along with Lundbeck, sponsored a meeting chaired by Jackie Baillie MSP on Alcohol Dependency in Scotland on 15 May 2013.

The Wellbeing Alliance does not disclose a list of clients. In 2012 Jacquie Forde (Chief Executive of the Wellbeing Alliance and Director of Quorate Public Affairs) listed her clients on the WoW website where she advertises her services as a 'Business coach'. These included 'Johnson and Johnson, Almirall, Reckitt Beckinser, HRA, Lundbeck, Bank of Scotland, The Alliance amongst smaller business owners and individuals'.[9]

In response to an article in The Herald Jacquie Forde stated that Quorate has one pharma client that is currently "non active".[4] It is therefore unclear which of the pharmaceutical clients (Johnson and Johnson, Almirall, Reckitt Beckinser, and Lundbeck) are for Quorate Public Affairs or for the Wellbeing Alliance. 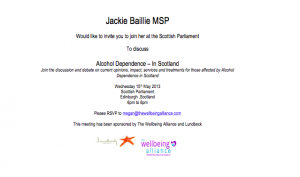 Jackie Baillie MSP invite to the Scottish Parliament to discuss alcohol dependence in Scotland. The meeting was sponsored by the Wellbeing Alliance and pharma company Lundbeck. Meeting held on 15 May 2013.

In May 2013 the Wellbeing Alliance worked with the pharmaceutical company Lundbeck to launch a survey regarding alcohol dependency.[10] Lundbeck license a drug called Nalmefene (Selincro), used primarily in the management of alcohol dependence, which was approved in October 2013 by the Scottish Medicines Consortium (SMC)[11], making Scotland the first country in Europe to prescribe the new drug.[12]

It was all done according to a code of practice, but it’s surely no coincidence, ... that Lundbeck has just launched a new drug that claims to help people reduce their drinking.

Within minutes of discovering this I got a tweet inviting me to publicise an “alcohol societal survey” being carried out by The Wellbeing Alliance . And guess who’s sponsoring it? Lundbeck again. Clearly there is a strategy going on, probably linked to the new drug, Selincro.[13]

Lundbeck and the Wellbeing Alliance both sponsored a meeting at the Scottish Parliament to discuss alcohol dependency in Scotland. The meeting was held on 15 May 2013 and invites were sent out by Jackie Baillie MSP.