Image of the 'OpCentre' created for Strategic Communication Laboratories from Vision 360 The Most Powerful Weapon in the World, Retrieved from the Internet Archive of 20 December 2005 on 22 April 2010

Vision 360 Ltd appears to have been a company that produced film and special effects for film including creating what it called a 'fake opcentre' for the James Bond film Goldeneye. 'Having created a fake Opcentre for James Bond', it notes 'it seemed only right that we should create a real one! well sort of?.'[1] This refers to the Strategic Communication Laboratories stand at DESI.

Vision 360 are the registrants of the domain name bdinstitute.org, which belongs to the Behavioural Dynamics Institute. The BDI claims to have existed since 1989 but only registered the domain in 1998 (see Behavioural Dynamics Institute, Whois entry) and launched a website in September 2006, according to page information on the site (checked 14 Februrary 2007). Vision 360 also registered and launched the webdomain www.behavioural.com in 1998 and this appears to have operated until at least 2000. 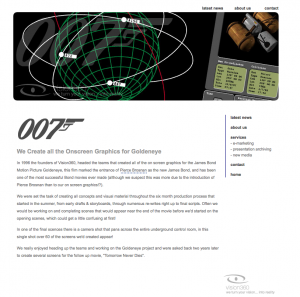 Screengrab of Vision 360 We Create all the Onscreen Graphics for Goldeneye, Retrieved from the Internet Archive of 5 May 2004 on 22 April 2010

In 1996 the founders of Vision360, headed the teams that created all of the on screen graphics for the James Bond Motion Picture Goldeneye, this film marked the entrance of Pierce Brosnan as the new James Bond, and has been one of the most successful Bond movies ever made (although we suspect this was more due to the introduction of Pierce Brosnan than to our on screen graphics!?).

We were set the task of creating all concepts and visual material throughout the six month production process that started in the summer, from early drafts & storyboards, through numerous re-writes right up to final scripts. Often we would be working on and completing scenes that would appear near the end of the movie before we'd started on the opening scenes, which could get a little confusing at first!

In one of the final scences [sic] there is a camera shot that pans across the entire underground control room, in this single shot over 60 of the screens we'd created appear!

We really enjoyed heading up the teams and working on the Goldeneye project and were asked back two years later to create several screens for the follow up movie, "Tomorrow Never Dies". [2] 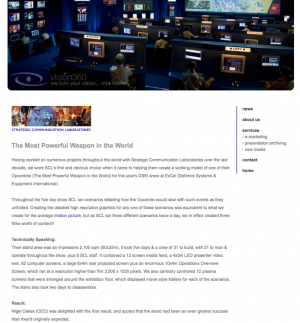 Screengrab of Vision 360 The Most Powerful Weapon in the World, Retrieved from the Internet Archive of 20 December 2005 on 22 April 2010

Having worked on numerous projects throughout the world with Strategic Communication Laboratories over the last decade, we were SCL's first and obvious choice when it came to helping them create a working model of one of their Opcentres (The Most Powerful Weapon in the World) for this year's DSEi show at ExCel (Defence Systems & Equipment International).

Throughout the five day show SCL ran scenarios detailing how the Opcentre would deal with such events as they unfolded. Creating the detailed high resolution graphics for any one of these scenarios was equivalent to what we create for the average motion picture, but as SCL ran three different scenarios twice a day, we in effect created three films worth of content!!

Technically Speaking:
Their stand area was an impressive 2,100 sqm (60x35m), it took five days & a crew of 31 to build, with 21 to man & operate throughout the show, plus 8 SCL staff. It contained a 12 screen media feed, a 4x3m LED presenter video wall, 62 computer screens, a large 6x4m rear projected screen plus an enormous 10x4m Operations Overview Screen, which ran at a resolution higher than film 3,500 x 1050 pixels. We also centrally controlled 12 plasma screens that were arranged around the exhibition floor, which displayed movie style trailers for each of the scenarios. The stand also took two days to disassemble.

Result:
Nigel Oakes (CEO) was delighted with the final result, and quoted that the stand had been an even greater success than they'd originally expected. The stand also won the honour of "Best of Show",[3]