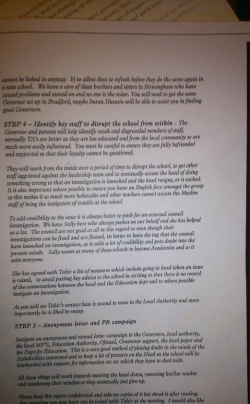 The Trojan Horse document was passed to Birmingham City Council in November 2013. It purported to be part of a plan for 'Operation Trojan Horse', an Islamist takeover of Birmingham schools.[1] According to the Independent, the document is widely considered to be a fake.[2]

Defenders of the documents authenticity note that includes details regarding Adderley School that had not been in the public domain.[1]

However, the Guardian has reported:

A source at West Midlands police said one line of inquiry is whether the Trojan Horse document is a hoax, linked to other claims of fraud brought by four former teaching assistants at Adderley primary.[3]

Four women were arrested in relation to a fraud investigation at Adderley School in April 204, the Birmingham Mail reported:

It is alleged the women were involved in a bogus resignation letters plot at Adderley Primary School in Saltley.

The fraud reinvestigation began after Birmingham City Council received a document which alleged hard-line Islamists were plotting to takeover some Birmingham schools, in an operation called Trojan Horse.[4]