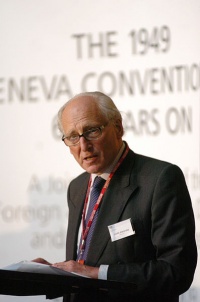 Thomas Bingham speaking at a joint conference by the FCO and the British Red Cross called "The 1949 Geneva Conventions - 60 Years On", 09 July 2009.

Thomas Bingham (Lord Bingham of Cornhill), was the first holder of the top three legal posts in the UK. Bingham served as Master of the Rolls, Lord Chief Justice and Senior Law Lord. He is widely regarded as one of the UK's most distinguished legal minds and is thought to be one of its most outstanding judges in the modern era. [1]

In 1996 he became a peer of the House of Lords and was given the title of Baron Bingham of Cornhill, of Boughrood in the County of Powys. [1]