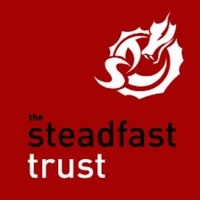 The Steadfast Trust is a charity dedicated to “work specifically for the ethnic English community". It is based in Macclesfield and works on promoting 'English' interests in education, legal rights, and welfare.

In 2010, the Trust approached ten universities with a £75 grant to buy two books Anglo-Saxon FAQs and Wayland's Work: Anglo-Saxon Art, Myth & Material Culture from the 4th to the 7th Century.

Cultural events supported by the trust include:

The trust was founded in 2004 by Tony Linsell, Stephen Pollington, and Jane Phillips. Linsell resigned in 2005 followed by the other two founders a year later in 2006. New trustees Julien Crighton and Shelly Marie Donohoe joined at this point.[1]

In 2007, the Charities Commission reviewed the applications of two organisations with aims similar to the Steadfast Trust. These organisations, The Ethnic-English Trust (“EET”, formerly known as the Malfosse Society) and the Ironside Community Trust (“ICT”), the final report turning down the applications from the EET and ICT stated:

The Members of the Commission noted that, in September 2004, a message posted on the Stormfront “White Pride” internet forum, and headed “New Charity For Ethnic English!”, announced the registration of the Steadfast Trust, stating that the Charity Commission had accepted for registration a charity specifically for the benefit of persons of Anglo-Saxon descent or origin.[2]

In 2009 the Charities Commission launched an investigation into whether the Steadfast Trust should have charitable status. This was based on queries around the validity of the beneficial group, and on whether the work of the trust went beyond charitable purposes and into promoting a specific point of view.

Concerns have been expressed as to connections between members of the Steadfast Trust and the Far Right. These include alleged links to the BNP, English National Resistance, Counter Currents, We Are the English, and Solidarity (a BNP-affiliated trade union).[3] [4]

The Steadfast Trust does not have to submit accounts to the Charities Commission as it has an income below £10,000 a year.[5]