From Powerbase
(Redirected from Thérèse Coffey)
Jump to: navigation, search 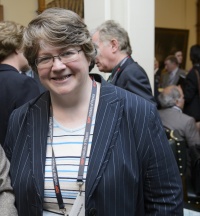 Therese Coffey, deputy leader of the House of Commons

She was appointed an assistant government whip in the cabinet reshuffle of July 2014.[1]

In the May 2015 election, Coffey retained her seat with a majority of 18,842, becoming Parliamentary secretary to and deputy leader of the House of Commons. [2]

In her maiden speech in 2010 Coffey said:

My diverse constituency also contains our beloved nuclear power station at Sizewell. I hope that we shall have many more reactors there — certainly at least two — before the end of the decade.

Coffey had a Conservative business dinner, estimated to be worth £1,000, donated to her by Huawei Technologies and was taken to the tennis at Wimbledon, estimated at £895, by Digital UK.[3]