From Powerbase
(Redirected from Tamboran)
Jump to: navigation, search

The company's stated corporate objective is 'to deliver extraordinary returns to our shareholders by successfully drilling and developing multiple discoveries from our highly prospective portfolio, by leveraging our team’s deep North American unconventional oil and gas experience'.

Tamboran Resources UK has controversially been planning to use fracking to extract natural gas in County Fermanagh, Northern Ireland since 2011.

In 2014 the company was granted an extension to a High Court injunction to stop protestors getting close to the Belcoo quarry, where they were holding a vigil. According to Tamboran, it was granted the injunction because of 'unlawful incidents'.

Northern Ireland’s environment minister Mark Durkan back then said he would listen to the concerns of Fermanagh residents and that fracking would not happen on his watch “unless there is very strong scientific evidence that it is safe”, which he claimed “simply does not exist at this time”. [1] A month later, in August, Durkan rejected Tamboran's request to drill an exploratory borehole for shale gas at Belcoo quarry 'after very careful consideration'. The company had intended to drill using "permitted development rights", which meant the firm wouldn't have needed to apply for planning permission.[2] The company's licence expired in September 2014, although it has now emerged that it made a full application on 20 September 2016. [3] 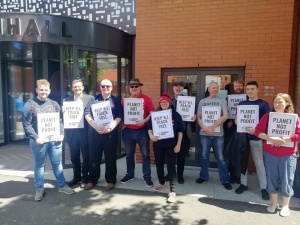 Protestors outside Tamboran's PR and lobbying firm's offices in Belfast

In May 2019 Tamboran announced it had made a full application for a petroleum licence to drill an exploratory borehole at Belcoo. It has claimed the gas is worth 'in excess of £20 billion' and that its project could create 3000 long-term jobs, as well as a “substantial and generous community investment fund”. The gas could potentially supply Northern Ireland for over 50 years, it said. [4]

Campaigners have questioned the timing of Tamboran's Belcoo application and public consultation. Heavily redacted documents obtained from the Department for Economy by Belcoo Frack Free show that the timing of the consultation after the local elections was suggested by the fracking company.

“With regard to a start date for the consultation [redacted] stated that a date after the local elections *as suggested by Tamboran Resources UK* was acceptable...” [5]

In 2019 the company set up a new website for the Belcoo project: http://www.fermanaghnaturalgas.com/ Twitter: Tamboran Resources UK @FermanaghGas

Tamboran Resources (UK) Limited (NI605039) is registered and based in Northern Ireland.