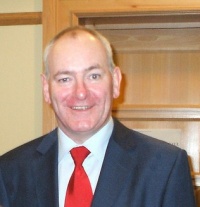 Durkan's father was an Royal Ulster Constabulary (RUC) District Inspector in Armagh who died before his son's first birthday. [3] He was educated at St. Patrick's Primary School and at St. Columb's College in Derry.[4]

He became involved in politics in 1981 when he became a member of the Social Democratic and Labour Party. In 1984 he went to work for John Hume as his Westminster Assistant. He became a key figure in organising by-election campaigns for the Seamus Mallon and Eddie McGrady in the 1980s [6].

Durkan's considerable strategic skills were honed by the American-based National Endowment for Democracy, a group which assisted the SDLP in professional electioneering from 1986.[7]

In 1990 Durkan became chairperson of the SDLP, a position he served in until 1995[8]. He was a key member of the party's negotiating team in the run up to the Good Friday Agreement [9].

He served in that position until 2001 when he replaced Seamus Mallon as Deputy First Minister[11]. He was also elected Leader of the SDLP in that year. Durkan was re-elected to the Assembly in the election of November 2003. However, the Assembly and the Executive remained suspended until 8 May 2007[12].

In the 2005 general election he retained the Foyle seat at Westminster for the SDLP with a sizeable majority, despite a strong effort by Sinn Féin to take the seat. Durkan won 21,119 votes [13]