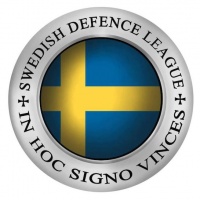 Members of the SDL attended an EDL demonstration in Luton, England in February 2011.[1]

Several SDL supporters attended the European Defence League demonstration in Århus, Denmark, in March 2012, where EDL leader Stephen Lennon announced that the next demonstration would be organised by the SDL in Malmo, Sweden.[1]