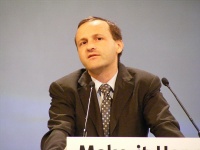 Webb was also the minister of state at the Department for Work and Pensions from 2010 till 2015.[2]

Having left office after the general election of 2015, Webb sought to take on a paid, full-time role as Director of Policy and Communications for Royal London Group, a pension company. The Advisory Committee on Business Appointments were initially concerned with his close working relationship with Royal London during his time at the Department of Work and Pensions, and thus advised a waiting period of six months following his last day in office.[3]