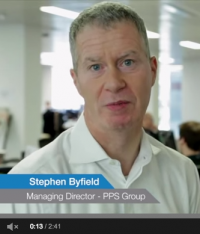 Stephen Byfield is a well-known planning lobbyist who was head of Newgate Communications public affairs practice in Brussels and London until October 2018. He left to join GK Strategy where he is tasked with 'growing its planning offer'. [1]

Byfield was previously managing director of PPS Group before their takeover by Porta Communications - Newgate's parent company, in November 2014.[2]

Byfield, a former staffer for a Labour MP and Charles St George founded the public affairs practice of PPS Group in 1994, with the majority of clients in the development industry.

In November 2014 Portal Communications, which includes Newgate Communications, Redleaf Polhill and Thirteen Communications and is run by David Wright, bought PPS Group for £6.2 million - paid for in cash and shares in Porta Communications. The deal meant PPS would be merging with Newgate and Byfield would become head of Newgate's public affairs practice in London and Brussels.[2][3]

On the deal Byfield said:

'PPS has been independent for nearly 25 years. We have achieved great things in that time but an injection of fresh capital and thinking is just what we need to foster our growth and innovation.'[2]