Shane Morris is an Irish-born biotech scientist employed by Agriculture and Agri-Food Canada, an agency of the Canadian government. The Canadian government, together with the Argentine government, joined a World Trade Organisation (WTO) trade dispute launched on 13 May 2003 by the US government against the EU for its reluctance to approve GM food and farming[1].

Morris is currently, while still apparently employed by the Canadian government, a student at University College Cork and lists his research interests as "Science policy, GM crops, Risk communication". He describes his postgraduate research as being in "Public perceptions and attitudes to modern biotechnology and resulting public policy and legislation".[2]

Morris has been internationally condemned for co-authoring a paper that has been described as a "flagrant fraud", and for attempting to shut down the GMWatch and GM-Free Ireland websites after they published reports about the scandal.

The paper was based on findings from a Canadian farm store where customers were offered a choice of GM or non-GM sweetcorn. The four researchers concluded that 50 percent more people opted for the GM crop.[5] 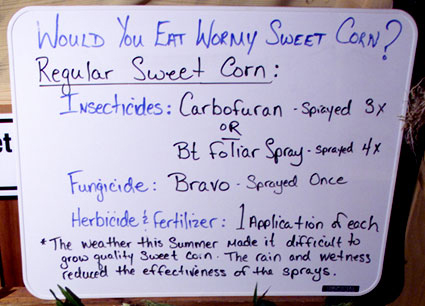 Unfortunately, Morris's paper did not disclose that above the non-GM corn was a sign (see picture, right) asking shoppers: "Would you eat wormy sweetcorn?", while above the GM crop was a sign saying, "quality sweetcorn". The Canadian journalist who originally uncovered the story, Toronto Star reporter Stuart Laidlaw, said there had been pro-GM literature in the shop, but nothing giving the arguments against GM.[6] Also, the contrast between “wormy” and “quality” sweetcorn was highlighted on the sign by the number of times the regular corn had been sprayed with insecticides and fungicide.[7] These blatant attempts to bias the consumers’ choice were not reported in the BFJ paper.

UK campaign group GMWatch published a photo of the wormy sweetcorn sign under the title "Award for a Fraud". Following its exposé, in May 2006, New Scientist carried demands from Dr Richard Jennings, a researcher on scientific ethics at Cambridge University, that the British Food Journal withdraw the paper.[8]

Here's how British satirical magazine Private Eye told the story of what happened next:

The journal's editor refused, although he did print a letter condemning the paper alongside one from one of its authors, Douglas Powell of Kansas State University, dismissing the allegations. Powell said the signs were only up for a week, contained the language of consumers and were "not intended to manipulate consumer purchasing patterns".

Morris said the wormy signs had been taken down long before he joined the research team on 27 September 2000. He put two photos on his blog that he said showed the "wormy" sign had been removed and replaced.

But a computer scientist who saw the images disputed this. And a Toronto-based food policy expert, Dr Rod MacCrae, who visited the shop on September 27 2000, told the Eye: "All I can tell you is that a wormy corn sign looking very much like the one in GMWatch's photo, was there at the farm the day I visited."

Dr Richard Jennings, who lectures on scientific practice at Cambridge University, is adamant the paper should have been withdrawn. "The case is a flagrant fraud, as far as I see it. It was a sin of omission by failing to divulge information which quite clearly should have been disclosed." But then, if the researchers had disclosed the wormy corn labels, would any respected scientific journal have published it?[9]

Morris's libel threats against the GMWatch and GM-Free Ireland websites backfired via a flurry of criticism including a complaint to the UK High Commissioner for Canada[10], renewed calls for his paper to be withdrawn[11], and expert photographic evidence from Tim Lambert, computer scientist at the University of New South Wales, concluding that the authors' accounts of the use of the signs were "untrue"[12]. Peter Melchett of the Soil Association accused Morris of resorting to "personal abuse" in attacking critics of his paper[13].

the continuing efforts by an employee of the Canadian Government, Shane Morris, to close down websites in the UK and Republic of Ireland which have, along with Dr Richard Jennings of Cambridge University, said that research which claimed that consumers prefer GM sweetcorn published by this employee and others and given an Award for Excellence, is a flagrant fraud.[14]

In December 2007, five Irish Senators, led by Senator David Norris, asked the Leader of the Senate to request the Government to formally intervene to stop "the extraordinary interference by an agent of the Canadian Government in political discourse in this country".[15]

In January 2008 forty scientists sent an open letter to the editor and editorial board of the British Food Journal (BFJ) calling for the journal to retract the paper. The signatories included leading experts in the areas of science policy and research ethics and two Members of Parliament, including Britain's former minister of the environment Michael Meacher. They comprised experts from Britain, Canada, the US, Norway, France, Italy, Brazil, Indonesia and Japan. The scientists called the British Food Journal's publication and subsequent honoring of the paper a "disgraceful incident" which "has brought science and the BFJ into disrepute".[16]

The Canadian Government also came in for criticism from Michael Meacher MP in an exchange of correspondence with the Canadian High Commissioner in London. The Canadian government had tried to distance itself from Morris's research by saying he was not their employee at the time he conducted it.[17] Meacher wrote to the High Commissioner:

I quite accept that Mr. Morris was not working for the Government at the time he participated in the research back in Autumn 2000 and that he co-authored this paper in a private capacity, but I cannot accept that that makes it an entirely private matter. Throughout his employment by the Canadian Government - first in Summer 2001 as a Professional Consultant to the Canadian Food Inspection Agency (CFIA) and later as its National Biotechnology Operations Coordinator, before going on to his current post as a Consumer Analyst for Agriculture and Agri-Food Canada - his scientific credentials, particularly in relation to biotechnology and consumer issues, must have been a significant consideration in assessing his suitability for the roles he was undertaking. The fact that he now stands accused of being party to mendacity, falsification and fraud in respect of biotechnology and consumer issues, is therefore hardly something that the Canadian Government can turn a blind eye to.

This is also not simply an issue of what Mr. Morris may have got up to before he was employed by the Canadian Government, as it is not only the study itself that is controversial but Mr. Morris's more recent attempts to defend the study. His statements as to how the study was conducted, and his role in it, have been contradicted by a number of scientists and others, who as you may know have in some cases directly accused him of making "untrue statements". In this context, I would also refer you to the current issue of the magazine Private Eye where he is accused of "melodramatic lies" in relation to claims he recently made to the magazine.

It is also inevitable that Mr. Morris's use of heavy-handed libel threats and aggressive public statements will be viewed as reflecting on the institution that employs him.[18]

For more information on Morris, see The GM-Free Ireland website.