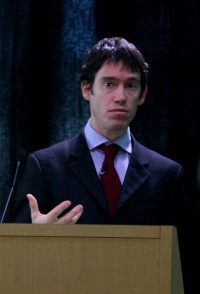 Rory Stewart is the UK Conservative Party MP for Penrith and the Border,[1] who was re-elected in 2015 with a majority of 19,894 votes. [2] He is currently the Secretary of State for International Development.

Stewart, a former soldier who served in Iraq and Afghanistan, is a former chair of the Defence Select Committee. He has argued passionately in favour of maintaining defence spending at two per cent of GDP, which his party has refused to do.

He was appointed parliamentary under-secretary of state at the Department for Environment, Food and Rural Affairs, which some pundits dubbed 'a mysterious promotion', arguing that a role at the Ministry of Defence might have been a more obvious choice. [3]

In June 2019 Stewart was a contender for the Conservative Party leadership race. As part of his campaign, he distanced himself from the party's longheld backing for fracking, saying he believed Britain should not expand the practice because it needed to set an example to the world on cutting emissions. [4]

In 2009 Stewart had denied a claim by former British diplomat Craig Murray that he had 'worked as an MI6 officer in Afghanistan'.[5]

Matthew Bell of the Independent on Sunday reported:

"I've never met Craig Murray and I have no idea why he is saying this," [Stewart] tells me when I call, "It's not just false but extremely dangerous. I've been doing charity work in countries where people are already at risk and his claims will only endanger them further." Stewart's father is even more succinct: "It's bollocks."[5]

A 2010 New Yorker profile of Stewart examined his alleged MI6 career. The The Telegraph reported:

Asked by the magazine whether he had once worked for MI6, Mr Stewart reportedly said: "It's an unfair question", while "his mother, when asked, smiled, and said, 'I wouldn't begin to know'." The article's author, Ian Parker, wrote that Mr Stewart "later suggested phrases that I might use - such as his career 'giving the appearance of' such a path.[6]

Stewart's father, Brian Stewart, reportedly confirmed to the New Yorker that he himself was a senior MI6 officer in the running to become chief of the service in the 1970s.[6]