Robin Ashby has been described as "one of the Britain's best known defence lobbyists". Companies he is known to have lobbied for include BAE Systems, Northern Defence Industries, Boeing and Rolls-Royce. [1]

Ashby is also director-general of the UK Defence Forum, a non-profit organisation sponsored by major arms companies, and is the managing partner of lobbying consultancy Bergmans PR Consultants. 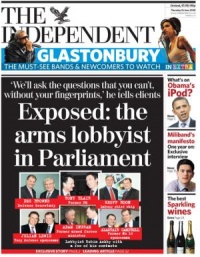 In June 2008 The Independent carried a front page story exposing Robin Ashby as gaining privileged access to Parliament and ministers. The article stated:

A senior arms lobbyist is gaining access to ministers, MPs and peers inside Parliament using a research assistant pass allotted to a member of the House of Lords who benefits financially from one of his companies, The Independent has learnt.

Robin Ashby, who is chairman of a defence consultancy firm that offers to ask questions of government on behalf of its clients "without your fingerprint being evident", includes among his acquaintances the Defence Secretary, the Chancellor and the Chief Whip.

Mr Ashby's firm, Bergmans, lobbies on behalf of more than a dozen large defence and aerospace companies including BAE Systems, Northern Defence Industries, UK Defence Forum, Boeing and Rolls-Royce, which has been criticised for its past links to the Burmese regime.[2]

Ashby was subsequently stripped of his parliamentary pass in June 2008, which in that instance had been issued by Baroness Harris of Richmond, who reportedly recognised "that in view of Mr Ashby’s other commercial interests this arrangement is open to misinterpretation".[3]

Ashby, however, held two more parliamentary passes again between 2010 and early 2013. He has always denied any conflict of interest arising from holding such passes. In June 2010 in response to influential political blogger Guido Fawkes's incredulity over how Ashby had managed to secure yet another (third) pass as secretary of the APPG on Armed Forces, and thus "roam the corridors of power and take full advantage of the parliamentary hospitality and entertainment, for himself and his clients":

[Ashby argued] he is more of a hobbyist than a lobbyist, his hobby being the UK defence industry which doesn’t pay him much more than expenses. He claims he is basically semi-retired, with an office and a staffer. The Millbank, Brussels and Washington office addresses on his website are all “rubbish” he says. When Guido pointed out the obvious commercial advantages of having a parliamentary pass for someone who offers a parliamentary monitoring service he said he does that all online. All clear? [4]

As of March 2013 Ashby remains listed as a member of staff for UKDF patron and former defence minister Lord Moonie on the Lord's register of interests, which records the following details: