Rob Harrison is the alias of a Special Demonstration Squad undercover officer who infiltrated a number of London left-wing / anarchist groups including State of Emergency Collective, No Borders London, Globalise Resistance, rampART and the International Solidarity Movement from 2004 to 2007.[1]

As part of his cover, Rob presented as a DJ, using the moniker DJ Boogie Knights (or Boogieknight). As such he played numerous parties and benefit gigs for the groups he targeted. He also organised a number of these fund-raising events events. Emails from 2006 indicate that he was familiar with bands who were supportive of protest causes and had personal contacts with them, which he used to inquire about putting on benefit nights.[2]

This page gathers together a list of benefit gigs which Rob either performed at and/or was instrumental in organising. It also provides images of various posters / flyers and other notices where Rob appeared under his performance name. Though Rob may have appeared alongside various other musicians and artists, many did not know him personally.

This is an incomplete list and not all benefit nights for the groups he targeted in the period he was active have been listed. If you are able to provide further information on his role in these events, please get in touch.

This will be followed in the evening by a fundraising music night:

RAGE AGAINST THE OCCUPATION
Saturday 21st May
7:30 til 3am @ Sahara Nights, Pentonville Road, Kings Cross, London
£7 / £5 before 9 and Conc. 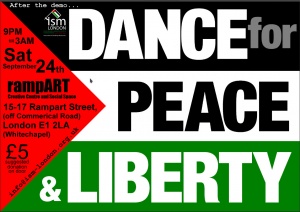 Benefit night for London ISM held at RampART, to follow the Stop The War national protest: the 'March for Peace and Liberty'. According to Asa Winstanley, Rob was the driving force behind the organising for the benefit, which was a very successful fundraiser for ISM.[5][6]

An advert for it was put on Indymedia:[7]

After the Stop The War national demo "March For Peace And Liberty", come to rampART Creative Centre and Social Space, 15-17 Rampart Street, London E1 2LA (Whitechapel tube) and party from 9PM till 3AM with DJs, live music & Taybeh Palestinian beer.

A benefit night at ElectroWerkz, Torrens Street, London with proceeds to Project Hope and to Palestinian Anti-Apartheid Wall Campaign. The event is organised in collaboration wtih Palestinian Solidariy Campaign, ArtMusicPolitic and Zaytoun. Among the musicians playing is DJ Boogie Nights.[8] 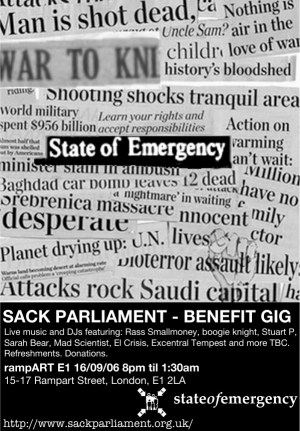 Flyer for State of Emergency benefit gig of 16 September 2006

Held at rampART, with DJ's including Boogie Knight. A notice for the event was posted on Urban75.net by Rob's alias 'Boogie Boy'.[9]

'State of Emergency' is a party being held at the rampART to raise funds for the Sack Parliament event on the 9th October. The party is a night of eclectic funk, hip hop, reggae, soul, disco, techno, house and everything else in between, noise, beats and more. DJ's on the night will include Stuart P ('Hit Or Miss'), boogie knight and Rass Smallmoney.[10]

Rob's DJ alias appears on publicity flyers, and the event was also advertised on Indymedia,

Rob was active in the run up to the event. Minutes of the group's meeting of 15 August 2006, taken by Rob himself, note he was the prime mover for it:[11]

R proposed that ideally a fundraising event could be arranged for the first or second week of September.
Proposal accepted - R to identify venue and acts etc to be involved, equipment and djs etc.

He also sent the following to State Of Emergency email list on 7 September 2006.[2]

Two quick bits: Request for rampART for training has been made for all three dates Deposit for rampART gig is £25, returnable as long as the space is cleared and cleaned up at the end. I will pay.....so please make sure some of you help to clean and clear up!!! Once flyer has been recieved this will be used by them. Rob
x

With Rob posting a follow-up on 18th September:[12]

To all the artists who gave their time and energy in performing, and to rampART for the support and help with making this happen.
To those who didn't or couldn't make it, we will be back with another one very soon.
bx
boogie

Held at the rampART Social Centre to raise funds for the for Detainee Support Network (a project in part of London No Borders).[13][14] Rob appears to have been part of the group of people putting this on.[15]

This event followed on from a protest earlier that day, 'SOS Freedom!', called by No Borders London in solidarity with Harmondsorth detainees, which tookplace at the London offices of Kalyx / Sodexho, the company running Harmondsworth Detention Centre.[16][13]

3 February 2007: No Borders benefit at Vortex

The Vortex was a squat of a former jazz bar in Church Street, Stoke Newington, which succeed The Square social centre; it was opened on 6th January 2007, and evicted in early March[17][18], which may have prevented the proposed night going ahead.

On 3 February 2007, Vortex hosted a No Borders benefit night which including ex-detainees from migrant detention centes as speakers and musician David Rovics.[19] The event was in part to build momentum towards the demonstration against Colnbrook and Harmondsworth detention centres on 10 February 2007 which Rob was also part of organising.[20]

I'm going to be around from about 5ish at the Vortex - I'm happy to bring some tunes and play one of my usual sets (non Techno of course!).

In several emails he mentions having picked up stuff from this gig in his car, indicating he had an active role around it.[15]

On 3 March 2007 Rob posts on Urban75 looking for DJs 'with a political sensibility' to play a gig in north London on 16th Month.[21] This probably relates to an email of 3 March 2007 regarding organising a benefit night that month for State of Emergency at the Vortex squatted social centre in Stoke Newington, in which Rob wrote:[2]

I'm going to speak with someone at Vortex in the week to find out exactly what they can and can not provide. I'm also speaking to a few people to see if they are available to dj with me on that night, I want there to be some quality control as far as the djs and the music are concerned.
The decks and other things I have, the use of a PA should not be too much of a problem.

Having been going since 6 January, the squatted social centre was evicted on 8th March, having survived earlier attempts to remove the occupants.[22]

1 May 2007: Benefit for Migrant and Refugee Rights

Rob plays Mayday Party benefit gig at rampART along with DJ Rubbish. The event is titled 'A Benefit for Migrant and Refugee Rights: Regularisation For All & An End To Deportation & Detention'. This is in support of the group organising a protest the following week on 7 May. Rob advertises this on Urban75.net.[23]

Alabama 3 play benefit night in support of the Gatwick No Borders Camp, the gig taking place at Brixton Jamm, 261 Brixton Road.[24] Rob Harrison was involved in this event, helping advertise it on Urban75.net where he wrote:[25]

The Alabama 3 have a gig Friday 24th August at Jamm, 261 Brixton Road, London, SW9 6LH (www.brixtonjamm.org), with madness and mayhem staring at 8pm and ending at 5am!!!!! This event is being held in support of the No Borders camp scheduled to take place between September 19-24th, close to Gatwick. This camp is designed to raise awareness of the building of a new immigration detention centre at Gatwick. No Borders has been given a quantity of tickets to sell for this gig, with the proceeds raised going directly to supporting the efforts to finance the camp infrastructure.
If you wish to purchase a ticket for this event (normally priced at £8) then please contact me for further details. ANY support that you can offer would be greatly appreciated. Tickets can be delivered personally if required.

Rob was involved in preparations for the Booty Rebel DIY dance night at the Camberwell Squat ('Black Frog).[26] It did not go ahead as the venue was evicted the day before.[27]

However, he is believed to have been present for another, similar night called 'Disco Rebel', for which he may have provided equipment.[28][29][30] 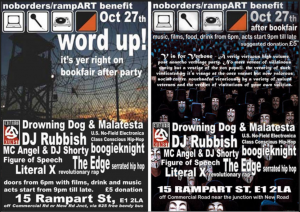 Flyer for No Borders / rampART benefit gig of 27 October 2007

No Borders held public meeting at the 2007 London Anarchist Bookfair, Queen Mary College, Mile End, E1. This was followed by an after-party / social night at rampART raising funds for both No Borders and the venue. DJs included boogieknight.[33][34][35]

With the bookfair nice and close this year and both noborders and rampART in need of cash, we've jumped at the chance to host a post bookfair benefit gig. In keeping with the verbose nature of the day, the after party features anarchist poets, conscious hip-hop/rap plus DJs, films and more.
Starts 6pm with food, films, DJ's and open mic (performers please get in touch)

Rob pushes the event on Urban75, and thanks those who attended on behalf of No Borders and the rampART collective.[36]

It is clear that Rob was active in organising this event as an email from Rob to London No Borders, dated 15 October 2007 shows:[37]

The arrangements for the gig on the 27th are continuing, a flyer has been produced and discussions are taking place regarding the possibility of printing approximately 1000 flyers for distribution before and at the Anarchist Book Fair.Any suggestions as to a reliable and cheap printers would be appreciated! If anyone wants to make a suggestion regarding acts appearing please feel free to contact me. If we can make it happen, we will.

At present I would really like some indication (off list)as to who is available to help on the night, clean up, be on the door and help with the bar?

And regarding the bar, this may well be ethically sourced (in the same way as that seen at the Climate Camp) so it may require funding. This is a joint enterprise but if someone could indicate how much money we have (if any) that would be great (off list).

I'm also interested in the possibility of having transport available on the day to take people from Mile End to the Rampart. If anyone knows someone with a large van or transit bus, a valid licence (mine isn't!), valid insurance and a position sympathetic to No Borders please contact me off list as soon as possible! If this could be arranged I think it could be of significant help, and I would love to have this information available on the flyer!(the fact that transport is available)

Finally I want to say a big THANK YOU to all the people who were interested and cared about what was going on with my transport nightmare. You know who you are and it made a difference.

Other emails also corroborate that Rob had an active role in organising for it, discussing issues such as microphones needed and the supply of beer for it.[38]

I just wanted to say thank you to all the people who came along and supported the joint No Borders and rampART collective gig on Saturday. I attended a meeting this evening and the feedback from the rampART crew was very supportive and positive. We did manage to make some money :) - I'll give a full break down of the costs at the next London meeting!