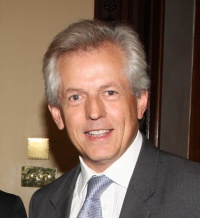 Richard Graham has been the Conservative Party MP for Gloucester since 2010.[1] In the 2015 general election, Graham retained his seat with a majority of 7,251. [2]

Graham worked for several years with John Swire & Sons in the Far East and Europe, mostly with their airline Cathay Pacific Airways. He became General Manager of Cathay Pacific in France and the Philippines as well as working in Jakarta, Hong Kong and London.[3]

In 1986 he joined the Foreign Office and was posted to Kenya (as Second, and later First, Secretary) in the British High Commission. He was First Secretary in the British Embassy in Beijing, as well as British Trade Commissioner China from Hong Kong and Consul for Macau during the period from Tiananmen Square towards the Handover of Hong Kong.[3]

Richard then worked for Barings plc as Chief Representative of their China office 1993-5, and then as a Director of Baring Asset Management 1995-2010, running their International and later Institutional Business. He was a director of The Greater China Fund Inc 1995-2005 and Chairman of the International Financial Services Ltd (IFSL) Pensions Group.[3]

Following his election as Gloucester MP in May 2010, Graham was elected to the Work and Pensions Select Committee and served until appointed Parliamentary Private Secretary (PPS) to Rt. Hon. Lord Howell of Guildford (Minister of State, Foreign and Commonwealth Office) in November 2010 until he was appointed as PPS to Hugo Swire. In autumn 2012 Graham was appointed as the Prime Minister’s Trade Envoy to Indonesia.[3]