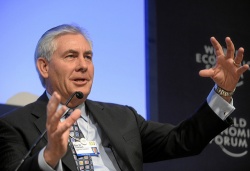 Rex Tillerson is the CEO and USA chair of the US's largest gas producer Exxon Mobil.

In December 2016, Tillerson was nominated by president-elect Donald Trump to be secretary of state. [1]

Sued fracking company over site near his Texan home

In an article about the case, business magazine Forbes noted, 'If anyone has a better nominee than Rex Tillerson for this month’s Hypocrite Hall of Fame I’d like to know who it is'. [2]