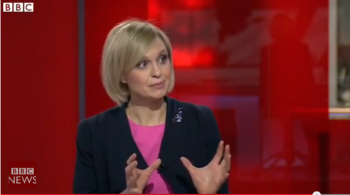 Rebecca Morelle is the science reporter with the BBC World Service.[1] Prior to joining the BBC in 2005, Morelle (then known as ‘Becky’) was a press officer at the Science Media Centre (appointed in 2001 in advance of its creation in 2002).

Morelle graduated from Oxford University in July 2001, with a first class degree in Chemistry.[2]

‘After completing her fourth and final year working on a research project and thesis on an enzyme implicated in Alzheimer's Disease, she began work at the Royal Institution in September 2001.'[2] She ‘then spent a short spell working in the fundraising department and the Director's Office before being appointed to her position in the Science Media Centre in December 2001.’ [3]

Both she and Fiona Fox started in December 2001 and were responsible for the founding document the Consultation Report, which noted their role:

Fiona Fox started work in December, along with Becky Morelle, a Chemistry graduate from Oxford who was appointed as the media relations assistant. With the broader aims and vision from the Advisory Council as their starting point, the SMC staff began a major consultation with key stakeholders to identify the day-to-day priorities of the new service... The consultation was carried out between December 2001 and February 2002.[5]

In around 2004 Morelle was promoted to senior press officer. [2]

In April 2005 Morelle alerted Australian science communicators that she was involved in setting up the Australian SMC:

As some of you may have already heard - and I think there has been some talk on this forum - that there is going to be an Australian version of the Science Media Centre, based in Adelaide. It is currently in the process of being set up. I am going to be coming over to Australia at the end of this month for a period of 6 weeks to lend a helping hand to this process, which I am obviously very excited about! One of the things I'll be working with Aus SMC on, will be to help carry out a similar process to one that the SMC Director (Fiona Fox) and I carried out in the UK before we opened - and that was to consult widely with the UK community (science correspondents, press officers, news journalists, scientists, politicians etc)[6]

Morelle appealed for help with the consultation:

during my 6 week visit (28th April to 10th June), I will be based in Adelaide but spending time in Sydney, Canberra, Brisbane and Melbourne etc and I would like to consult people from the groups of key stakeholders of the centre: ie the science correspondents, press officers, news journalists, scientists, politicians, science communicators etc. So... it would be incredibly helpful if you could:

On the launch of the Australian SMC its CEO Susannah Elliott noted that: ‘A National Consultation process directed by Becky Morelle, co-founder of the SMC in the UK, was used to guide the establishment of the Centre.’[7]

In late 2005 Morelle was the first recipient of the ‘Ivan Noble bursary’. The BBC reported that ‘Rebecca will join the BBC News website in the New Year, and will spend six months in the department developing her journalistic skills.’[8]